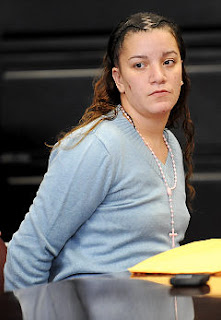 Carmen Huertas (pic) received 4 1/2-year sentence for the DUI death of a 4-year old child (not her daughter) consistent with the recommendation of the child's father according to a story at the New York Daily News.

As I've said on many occasions, Ms. Huertas and drunk drivers like her, actually receive life sentence--this is not hyperbole.  If you have a conscience, you don't shake your responsibility for the harm you drunkenly did others, just because you were sentenced for the criminal offense.

According to the Daily News story:

'I am not a monster,' the mother of three said while members of her family sobbed. 'I am a loving mother who made a horrible decision that caused the death of a wonderful child. I know that I must be punished.'"

Huertas, own daughter was injured in the crash when she lost control of her speeding van on a curve.
Posted by Anonymous at 9:22 AM