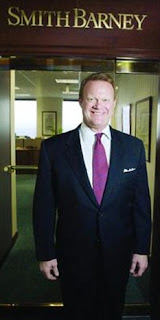 Randy Wyrick at the Vail Daily News reports that Martin Joel Erzinger (pic,right), a wealthy 52-year old, investment banker with Smith Barnery, struck a deal to plea bargain requiring him to plead guilty to two misdemeanor traffic counts for his hit and run on bicyclist Dr. Steven Milo a NYC plastic surgeon who was seriously injured. Scott H. Greenfield at the excellent Simple Justice blawg featured a post he enstyled It's Good to Be Rich In Colorado on this story yesterday; and, BikeSnob alluded to the plea bargain in his post, Monday. The "heat" and "outrage" stems from the favoritism ambitious Eagle County (Vail) District Attorney Mark Hurlbut (pic, below left) appears to be showering on the fabulous wealthy banker, Mr. Erzinger. This is the coverage at the New York Times.
District Attorney Hurlbut "explains" the plea deal in a column in this AM's edition of the Vail Daily News.  You can read Hurlbut's rationalizations, er explanation for yourself--but it boils down to a consideration of Mr. Erzinger's ability to "write a check, " huh?  Really! 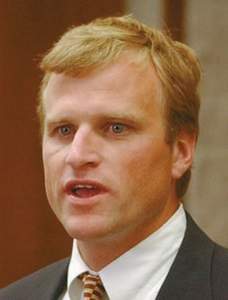 Hurlbut wants to be a State Senator.  This is the link to his website.
DA Hurlbut is the grandstanding local prosecutor who indicted and lost the rape prosecution of Kobe Bryant in what legal commentators described as preposterous from the outset.  Local voters rewarded Hurlbut by not re-electing him as prosecutor, ergo his run for the State Senate--apparently his effort to find private employment is not going all that well.
Notably, Hurlbut has one other infamous bicycle related-prosecution.  He is the same prosecutor who charged two female mountain bikers with felony fraud over competition in the Leadville 100, an important annual Vail area mountain bike race.  This story is worth reading about because as strange as it sounds it involved nothing more than a registered competitive cyclist unable to participate in the bike race, giving her registration materials to another athlete who did participate, and won the race through her athletic endeavors.  The "crime" of riding under the registration of the non-participating athlete's registration was sufficient for Hurlbut to charge felony fraud!

What you need to think about is that Hurlbut is operating at the nexus of law, ambition, power, and materialism at the extremes.  His decision to plea bargain the crimes of vehicular assault on a cyclist and fleeing the scene to conceal the criminal offense, to misdemeanors for a wealthy investment banker is astonishing and outrageous.  So it's not surprising that as Hurlbut, himself notes. he has received over 1000 emails "over the weekend."  Apparently Hurlbut was counting on something other than "outrage" when he cut this deal with Mr. Erzinger.
The world is often a hostile and perilous place.  Money helps.
Posted by Anonymous at 7:39 AM