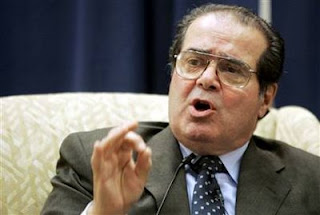 Dahlia Lithwick notes this exchange between 'Nino and Peter Eliasberg, the ACLU attorney arguing the Cross on public lands case at the Supreme Court, yesterday:

[P]eter Eliasberg—the ACLU lawyer whose client objects to crosses on government land—suggests partway through the oral argument that perhaps a controversial World War I memorial might consist of "a statue of a soldier which would honor all of the people who fought for America in World War I and not just the Christians."

"The cross doesn't honor non-Christians who fought in the war?" Scalia asks, stunned.

"A cross is the predominant symbol of Christianity, and it signifies that Jesus is the son of God and died to redeem mankind for our sins," replies Eliasberg, whose father and grandfather are both Jewish war veterans.

"It's erected as a war memorial!" replies Scalia. "I assume it is erected in honor of all of the war dead. The cross is the most common symbol of … of … of the resting place of the dead."

Eliasberg dares to correct him: "The cross is the most common symbol of the resting place of Christians. I have been in Jewish cemeteries. There is never a cross on a tombstone of a Jew."

"I don't think you can leap from that to the conclusion that the only war dead the cross honors are the Christian war dead," thunders Scalia. "I think that's an outrageous conclusion!"

Remember when Sotomayor was being confirmed right wing lawyers and Senators questioned whether she could exercise judicial temperament. Temperament is the quality in a Judge where the Judge is composed, patient, courteous, and respectful to all. In short, not Scalia. The irony of the right wing attack on Sotomayor is that her critics would take Scalia x 9.

Practicing in a courtroom where the Judge is a bastard is very painful. I can honestly say that in my career I've seen Judges do it rarely--and I've had it happen to me even less often. Frequently, lawyers will complain about this or that Judge but in general they are complaining about a Judge who is unsympathetic to an argument and the lawyer will make the argument that the Judge was intemperate. I'm sure I've done this sort of outcome-based judgment particularly when I was a your Bad Young Lawyer--but the true monster Judge is a very rare creature. In Your Home Town there are very few active Bad Actors, temperamentally--but, there are a few. Usually, these Judges are the ones extolled for being "tough" when all they are are merely bullies. The voters elect and reelect these creatures and only learn wheat monsters they are when they or a family member or a friend finds themselves trying to get a civil matter heard or resolved and this beast is the Judge on their case. Nothing like a raging Judge to lighten your load.

Posted by Anonymous at 4:27 PM