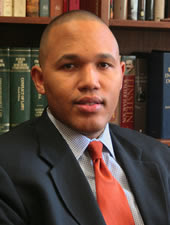 http://www.nytimes.com/2009/09/29/us/29bar.html?_r=1&scp=4&sq=supreme%20court%20&st=cse, the Paper of record had this illuminating article on the dramatic fall off in the case load of the US Supremes. One of the reasons given in the Times piece for the halving of the case load is the effect that court law clerks have on the non-selection of cases for review. Now I have no opinion on whether the Supremes are shirking their duties or not--but, I nodded in recognition at the observation concerning the role of the law clerk. Law clerks for the most part are in my experience law geeks. For instance, the picture to the right. I have no idea who this guy is, but if you google "law geek" his picture is on page one. And let's face it, he really looks the part.
Law clerks, and in Your Home Town, staff attorneys (don't fret it's a synonym) are these weasels who for the most part have never handled a real legal matter or paid a phone bill or any other invoice in their short, pathetic, loveless lives. Yet these baby monsters are delegated the important role of moving paper around the court's chambers and making recommendations about a myriad of issues from scheduling to whether or not a person should die. Cool, huh?
So, get this, these recent law school graduates often run court rooms and write the decisions issued by the Judge you elect and pay to be Judge. Here, in Your Home Town there is a Court of Appeals Judge who is, (in the language of twenty years ago) educable mentally retarded. This Judge Italianname is routinely re-elected and the cogently-written decisions that are issued in his name are written entirely by recent law school graduates. Is this a great world or what?
That the case load of the US Supremes is also a product of this great system is--well, let's just say, a little chilling.
Posted by Anonymous at 8:07 PM