Forensic Evidence, not in Texas

The secessionist bastard to the right is the Govenor of Texas and one of the people who bears direct responsibility for the murder of Cameron Todd Willingham. A commission looking into the execution of Willingham was set to hear 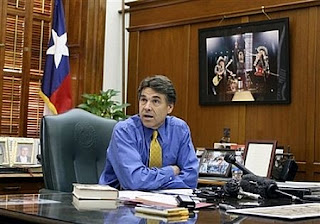 from the forensic expert who was highly critical of the "forensic" evidence relied on to prosecute Willingham in the so-called arson murder of his three children. The Govenor who actually had the evidence of Willingham's innocence but ordered the execution anyway--fired the comission chair and two commission members two days before the hearing on the bogus scientific evidence used against Willingham. Perry's new chairman canceled the hearing, http://www.nytimes.com/2009/10/01/us/01brfs-GOVERNORFIRE_BRF.html?_r=1&scp=1&sq=gov%20perry&st=cse

Govenor Rick Perry is an immoral pig.
Posted by Anonymous at 8:37 PM