"All Louisiana Judges Do It That Way"--Judge Porteous Update, and Other Thoughts on "Justice" on the Cheap 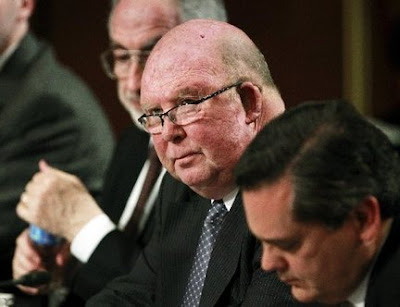 The Times-Picayune has this report, update, and column by Stephanie Grace on the impeachment trial of federal Judge Thomas Porteous (pic, above with attorney and law professor, Jonathan Turley).  The essence of Ms. Grace's column is the anxiety all citizens of New Orleans must feel when it is claimed that corruption in New Orleans, is so pervasive that New Orleans becomes a synonym for corruption itself.  She writes: 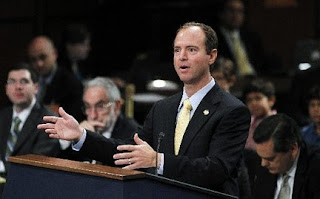 "U.S. Rep. Adam Schiff (pic, right), one of five House members prosecuting New Orleans federal Judge Thomas Porteous, predicted at the outset of the impeachment proceedings that the judge would defend himself against charges that he compromised his office back when he was a state judge by invoking Louisiana's sordid political reputation.
'After all, senators,' Schiff said he expected Porteous' team to say, ''It's New Orleans. They all do it, and if you're going to impeach judges in New Orleans for this sort of stuff, then you'll have to impeach all of them.'


Porteous' lawyers have just launched their defense, so it's too soon to say whether Schiff's prediction is accurate.  But the California Democrat was right about one thing: From the moment the impeachment trial opened this week, the so-called Louisiana way has been on full display.   As a district judge in Jefferson Parish, Porteous grew accustomed to being supported in a certain lifestyle, a parade of prosecution witnesses said.
One of his eager patrons was convicted bail bondsman Louis Marcotte [and his sister Lori (pic, left)], whose tentacles reached throughout the Gretna courthouse and who directly benefited from Porteous' willingness to split bonds for his clients. Marcotte, his sister and associate Lori, and several former employees of Bail Bonds Unlimited testified that they treated Porteous to many meals, and to a trip to Las Vegas (and also one for his secretary). BBU employees would pick up his car from the courthouse, have it detailed or have the oil changed for free, then drop it off, sometimes with a cooler of shrimp and bottle of Absolut Vodka inside. Two employees spent several days rebuilding a damaged wooden fence.
Holiday turkeys counted as currency in this universe, according to several witnesses, but more commonly it was dessert, specifically doberge cakes. Lori Marcotte said that's because her brother's ex-wife owned a bakery. 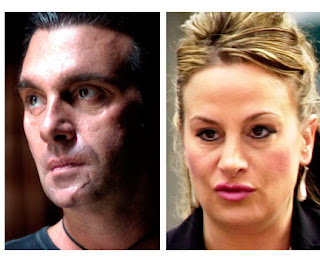 Also helping Porteous get by were lawyers Jacob Amato and Robert Creely. Porteous steered hundreds of do-little curatorships to their firm, and they funneled about half the fees -- $20,000 -- right back to him. Both testified that their motive was friendship for a judge who appeared to be struggling financially, although Amato acknowledged his concern that the unholy arrangement 'was going to turn out bad.'  An ethics expert who testified for the prosecution, Indiana University law professor Charles Gardner Geyh, described the relationship as a "classic form of corruption, by which I mean a kickback scheme.  Amato was more than a friend,' he said. 'He was a friend with benefits.'
Still more testimony centered on Porteous' expungement of a Marcotte employee's criminal record.  The employee was Aubrey Wallace, whose duties, he said, included attending to the needs of friendly judges. While on Marcotte's payroll, Wallace said he looked around and decided that he wanted in to Marcotte's line of work.  'You know, it was a lucrative business. There was a lot of money,' he said.

When U.S. Rep. Hank Johnson followed up by suggesting the Marcottes were 'drowning in it,' Wallace replied: 'Bathing in it.'  In order to become a bail bondsman, though, he needed his burglary conviction expunged -- and Marcotte made the arrangements for that to happen with Porteous.   Johnson asked whether Wallace felt he was entitled to have his record wiped clean.   'I would just say that I was fortunate,' he answered.   Did he feel like the expungement was on the up and up?  'There was some courtesy there, that's all I can say.'

The favors even extended to false statements to the FBI. Louis Marcotte told the committee that, when interviewed, he'd lied about their relationship and Porteous' financial problems so as not to torpedo the judge's lifetime appointment by President Bill Clinton to the federal bench.   What he wanted from Porteous in return -- and what he said he got -- were introductions to other Gretna judges who might be open to the same sort of relationship. Porteous was a leader, Marcotte explained, 'and everyone follows the leader.'

One of those other judges was Ronald Bodenheimer, who quickly cashed in on meals, home repairs and a trip to Beau Rivage from the Marcottes, and who would later plead guilty in the wide-ranging Wrinkled Robe investigation.   This week's testimony even featured an intriguing but unexplained cameo by a major Louisiana politician and former colleague of the senators who'll decide Porteous's fate.   Lori Marcotte testified that John Breaux, while still a senator, was part of a group that enjoyed a BBU-financed limo ride and meal at Ruth's Chris, along with Porteous.

So was this a gift for Porteous, she was asked. 'And I guess for Sen. Breaux too,'  she answered, 'If you want to put it like that."'
___________________________________
In the courthouses where I began my Bad career, Christmas time (and, oh so many other times of year) was a time of giving.  Cookie trays, fruit baskets, special event tickets, meals, travel, all sorts of little "thoughtful" BRIBES were offered and received.  The grateful recipients were anyone who could do anything for the lawyers and the many vendors "servicing" the industry including:  bail bondsmen, court reporters, "whore" doctors, document and copying companies.  The entire system oozed this grease, and those of us too poor to participate knew we were being disadvantaged in myriad ways--maybe our cases or other matters would languish, worse maybe we would lose rulings in the year, ahead, for reasons having nothing to do with the merits.  We were certain of this fact.  Pay to play, Baby.

Why shouldn't the young unconnected smart young solo practitioner lose the competition for clients and business--they were not going to "get" for the client what the sharp-suited, bejeweled and juiced dimwit was going to "get" for the client?  Makes sense, right?   Those practices and that reality is how and why it is that your local, county or parish, your state, and your national justice systems turns idealists into angry, cynical, or worse, corrupt Bad Attorneys and public servants.  This reality is why clients and criminal defendants view the system as "Just Us," not "justice."

The fact of the "get" and the "take" is nothing more than seeking for the self, alone.  Materialism, sex, murderous rage, alcoholism and drug addictions, all, are ego and the aftermath of the wallow in these ultimately shiny, shallow things.   And have no doubt, the corruption I came of age in, is gone.  The corruptions may be lurking underground--but the open and cynical buying of justice is now a thing of the past.

Actually justice on the cheap, is a marvelous and wondrous thing.  It is biblical and philosophical, because by definition participants in genuine justice are concerned about something essential to our molecular selves--the continuation of civil society, the safety and security of our community, the health and protection of our family, the propagation of our species, and our souls.  We can get angry and cynical when you look around at the Catholic Church sex abuse scandals, the corrupt judges of "wrinkled robe," the murders and cover-up at Danzinger Bridge, the corruption in Detroit, Chicago, Cuyahoga and Maricopa counites;  or, you can choose as I do to see these manifestations as darkness into light.

I choose to believe that as I change inside, as I reform myself and care about my 'badness" I reform not only myself but my view of the world.  I see prayers being answered.  Didn't I attend mass sometimes, daily, and participate in the prayers of the faithful for our priests, and bishops, and the pope, and our governmental and world leaders?  Did I not endlessly pray for myself and my family as I was in professional and personal free fall?  In truth, I did.  Are not my prayers, and the prayers of others being answered?  I think so.  A dear friend of mine points out that ALL--are either concealed or revealed blessings.  What we see as bad or tragic circumstances in our lives are nothing more than those blessings from which we have yet to work out the benefit to ourselves.

In the revelation of these terrible corruption scandals, it should be obvious that we are receiving endless light.  Our prayers are being answered.  That which was pathological and out of sight is now coming into view and can be dealt with in the course of our human affairs.

You must see, do you not?-- that as our civilization evolves--admitting inevitable setbacks, the trend of our civilization and our society is progress.  We create problems, we solve problems.   We hurtle through space and time, sharing our common humanity, consciously and unconsciously progressing towards the resolution of obstacles to our shared habitation of this place.
Posted by Anonymous at 10:26 AM