Alito at the Red Mass

Remember when Bad Lawyer described the multi-faceted gaming of the lawyers, judges, and law givers, here, in OurState and OurTown by the Catholic Church?

One of the really disturbing examples of this is the Red Mass, an annual celebration of all things Catholic by zealot Catholic lawyers.  Note:  I am a zealot Catholic lawyer (by training, baptism and faith.) These masses were particularly galling in the years in which the liars at the various Dioceses nationally were denying the crimes of child rape and abuse; who (Bishop Quinn) were threatening malicious prosecution law suits against victims and their lawyers, fighting efforts to expand the statute of limitations, and who were actively covering up the criminal activity (Cardinal Law.)  These jolly little luncheons rubbed the noses of survivors of child rape and molestation in the power of the Church to override the law, to crush justice.  These masses featured the big-Kumbaya with the Justices of OurState Supreme Court, the local bench, the legislators, and the defense bar.  Lovely brass plates (the St. Thomas More awards) were given to honor these great Catholic lawyers who were screwing the victims of the Church out of any semblance of justice.  Thing of the past? 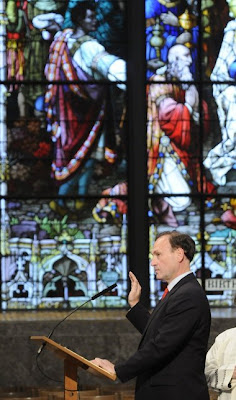 Witness:
Yes, that's Associate Justice Samuel Alito re-administering the oath to the Catholic lawyers of western Michigan.  Here's the link to the story at MLive.com.
Feeling better?  More optimistic?  Hold on to that feeling.
As Bishop Quinn nonchalantly told the Midwest Canon Law Society in his humorous accounting of the murder and dismembering of the parish housekeeper by the New York priest, the Church survived that scandal, they'll survive the child sex abuse scandals.
Quinn, a canon and Ohio civil lawyer was a past recipient of the St. Thomas More award at a Red Mass luncheon, also advise all these Canon lawyers at the same speech, cited above, to go back to their diocese and comb through the personnel files of their priests and pack up the evidence to the Vatican embassy in Washington where there was diplomatic immunity.
It is chilling to think in light of the dump of documents by the diocese of San Diego, in light of the scope and scale of crimes against American children, in light of the active obstruction of justice by the various Diocese nationally, Justice Samuel Alito is comfortable doing what he did in Michigan.  Alito was honored at an "invitation-only" dinner.  Would Justice Alito feel as comfortable at a service for Klan lawyers?
Posted by Anonymous at 9:16 AM