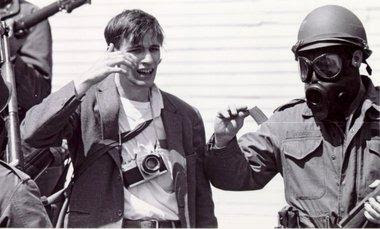 On May 4, 2010 I wrote at some length about Ohio's slaying of 4 students at Kent State University and my personal connection to that campus in the ensuing years.

My academic path brought me into contact with the collective behavior researcher, Dr. Jerry M. Lewis, a peace marshall on May 4, 1970 and an eye witness to the arbitrary and capricious killing of Sandy Scheuer who died for the crime of walking between classes at the wrong time and in the wrong place.    My study with Dr. Lewis led me to do archival reading of all the local news accounts from that region then on microfilm at various libraries.  One of the tantalizing questions never fully answered was what was the involvement of a "law enforcement" photographer Terry Norman (pic, above) who was packing a .38 caliber revolver which was thought to have been discharged by Norman prior to the fatal fusillade by the National Guard.  Over the weekend, an investigative news story at the Cleveland Plain Dealer website, Cleveland.com renewed this forgotten wrinkle.

Remember that the National Guard defended themselves initially by claiming that they were responding to sniper fire.  This was refuted.  The Guard claimed the sniper fire that provoked their gunfire came from locations and places for which film (yes, there was film in those days) and photographs demonstrated no evidence.  Dr. Lewis speculated in conversation and classes with me that Norman was the source of the gunfire based on this and other photographs of him walking around with a revolver.  It turns out that audio analysis actually now corroborates Dr. Lewis' speculation.

This is an extraordinary mystery, so let me add a further fantastic facet to ponder.  The 4 dead in Ohio came in the wake of the invasion of Cambodia, and the Senate campaign of close Nixon ally, then Governor James Rhodes.  It was Rhodes' incendiary May 3d rhetoric in which he called students "Brown Shirts" among other invective which has long been credited as the motivation for the shootings and the subsequent generational schism over the shootings.  Bearing this context in mind, we now know that a group of thugs were then officially operating out of the White House, engaged in break-ins, assassination conspiracies, and political operations of all stripe.  These were Nixon's plumbers: E. Howard Hunt, G. Gordon Liddy, financed by Howard Hughes, and orchestrated by Colson, Haldeman, and Erlichman.  Many, many others, former FBI, CIA, even a former NAZI agent were involved in the dirty tricks and crimes that fall under the rubric, Watergate, and which have come to light.  So, is this one of the early provocations by the Nixon gang? 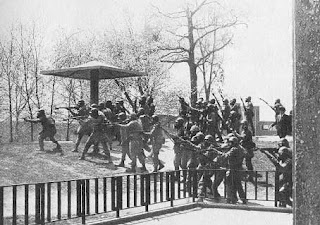 We can now say with relative certainty that Terry Norman, an anonymous "photographer" with press credentials issued by the Ohio National guard walked into a crowd of students brandishing and ultimately discharging a .38 caliber revolver 4 times.  The national guardsmen claimed in sworn testimony that they wheeled and fired because they took sniper fire although none could pin point the location for where these shots came from.  I can add one further fact from viewing the physical area where the massacre occurred.  The Guard stood on a hill below them like a reflecting bowl, the students stood.  It is easily conceivable that Norman's gun shots resonated off the hard and rocky surfaces and was heard by these riot-geared National Guardsmen who killed my alums.

After his role at Kent, the FBI obtained employment for Norman with the District of Columbia police as a narcotics agent.  Janis Froelich wrote an intriguing story for the Tampa Tribune about Terry Norman.

So did Nixon and this crooks have a direct hand in triggering the slayings at Kent State on May 4, 1970?  What was once was purely speculation seems a step closer to being established fact.

Note:  todays' update at this link.
Posted by Anonymous at 10:27 AM