"Dear God, Let the IRS Attack My Church, So I Can Take Them All the Way to the Supreme Court..." 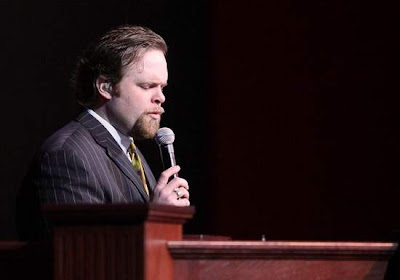 Reporter Grant Schulte at the Des Moines Register has this reamrkable story of the confluence of religion and state:

"The Rev. Cary K. Gordon has a prayer he recites as he campaigns against the three Iowa Supreme Court justices who are up for retention in next month's election. 'Dear God,' he says, 'please allow the IRS to attack my church, so I can take them all the way to the U.S. Supreme Court.'

Gordon, an associate pastor at Cornerstone World Outreach in Sioux City, says he will defy federal law this month when he urges the congregation to vote to not retain the three justices, who participated in a unanimous ruling that allowed same-sex couples to wed. His mass mailing to 1,000 church leaders in September prompted one national religious liberty group to file a complaint with the Internal Revenue Service.

Advocates of the separation of church and state and some religious leaders say Gordon's plan is illegal, immoral and an attempt to falsely frame his dispute as a freedom-of-speech violation. The Rev. Barry Lynn, executive director of Americans United for the Separation of Church and State in Washington, D.C., called Gordon's actions one of the most outrageous attempts to politicize a church that he has ever seen.  Others, such as Jeff Mullen, senior pastor of Point of Grace Church in Waukee, are urging Iowa pastors to communicate to their congregations the 'biblical mandate for involvement in local and national elections.'

Religious leaders on both sides of the gay marriage debate voiced strong opinions after last year's Iowa Supreme Court ruling. But on the Nov. 2 ballot question of whether to retain the three justices, many say they plan to stay silent.  The push by some churches comes in the heat of what could become the tightest retention election in history. A recent Iowa Poll found that 44 percent of Iowans who plan to cast a ballot in the retention election say they will vote to retain all three justices. Forty percent will vote to remove all three, and 16 percent say they want to retain some.

Gordon's campaign, 'Project Jeremiah 2010,' is named for the Old Testament prophet who rails against forces that 'defiled my land, and made mine heritage an abomination,' and those who 'handle the law.' Gordon said he has recruited leaders at more than 100 churches, which he declined to name, who will speak against Justices Marsha Ternus, David Baker and Michael Streit on the three consecutive Sundays before Election Day. The Liberty Institute, a socially conservative nonprofit group in Texas, has promised free legal protection to any church that joins the campaign.

The ban stems from a 1954 congressional amendment offered by then-U.S. Sen. Lyndon B. Johnson, which prohibited churches and charities from engaging in political campaign activity. Churches cannot advocate for or against a specific candidate, but are free to lobby for or against ballot measures or speak about political issues.  Churches that violate the law can be warned, fined, or - in extreme cases - have their tax-exempt status revoked.

The IRS received 237 referrals in the 2006 election cycle and investigated 100 cases, according to a federal compliance review. Forty-four cases involved churches. More than half of all the cases are still under investigation, but 'improper political activity' occurred in 26 instances, the IRS review found. The IRS has not revoked any organization's tax-exempt status so far.

'It's wrong, it needs to be challenged, and I don't think the IRS will do anything about it, because I think they know it's wrong,'  Gordon said. 'I think they would rather let me blather about this and leave me alone than risk losing their intimidation power over thousands of other churches.'

In May 2000, the U.S. Court of Appeals for the District of Columbia Circuit upheld the law when it sided against a church that attacked Bill Clinton in his 1992 presidential campaign. The court ruled that the government had a compelling interest in the integrity of the tax system, and in not subsidizing partisan political activity.

Gordon's plan is one of several efforts by conservative churches to challenge the IRS on a law they view as unconstitutional. The Alliance Defense Fund, an Arizona organization that promotes conservative biblical values, has sponsored a 'Pulpit Freedom Sunday' in recent years, a day when pastors speak specifically about candidates for office.  Connie Ryan Terrell, executive director of the Iowa Interfaith Alliance, which supports gay marriage, said several church leaders contacted her when they received Gordon's letter. The alliance, working in conjunction with the 'Justice, Not Politics' campaign to promote impartial courts, has not taken a stand on the retention vote. 'What the Cornerstone Church is doing is simply illegal and, in a lot of people's estimations, immoral,' Terrell said. 'Synagogues, churches and clergy can talk about the issue. They can talk about how their faith informs the issue. But they cannot cross that line and tell people how to vote.'  Terrell said the anti-retention campaigns want to push Iowa toward a more political, direct-election system for judges. The current system relies on a 15-member commission that screens judge candidates and sends three finalists to the governor.  'If they win in Iowa, which I don't think they will, it's not going to be where they stop,' Terrell said. 'It's very clear to us that there's a long-term political agenda here.'

Iowa's Supreme Court justices, in the unanimous April 3, 2009, opinion, stressed that their ruling does not infringe on religious rights and pertains only to government-sanctioned marriage. Gordon said the ruling attempts to redefine the institution.

The Iowa Catholic Conference supports a state constitutional amendment to define marriage as the union of a man and a woman, Executive Director Tom Chapman said. But Chapman said his group does not plan to wade into the retention debate.  'From our perspective, we're treating this as if it were a candidate election,' Chapman said. 'We work just on issues. We don't get involved in partisan politics, and we don't work for candidates or parties.'

Rabbi David Kaufman of Temple B'nai Jeshurun in Des Moines is one of the 150-plus religious leaders who signed a letter this year in support of same-sex marriage. But for judge retention and other campaigns, Kaufman said, his synagogue takes no stands.  Kaufman said his congregation plans to hold forums Oct. 24 for Iowa's governor, U.S. Senate and House races. All of the viable candidates were invited to participate, he said, but the judge-retention election wasn't discussed.

University of Iowa political science professor Tim Hagle said churches may have more influence than usual in elections when not much is known about a candidate.  'I'd be surprised if this effort was successful,' said Hagle. 'But even if they don't win, it might serve as a wake-up call to some judges.'"
______________________________________
This sort of thing is a constant in religion in America religious demagoguery over my lifetime.  There is absolutely nothing new in this bogus-jerk's preaching, it's the same provocative inquisitorial undermining of secular authority denounced by Jesus when Jesus said "Render unto Caesar the things which are Caesar’s, and unto God the things that are God’s,”  Matthew 22:21.

Jesus preached that it is right to submit to the state when asked; spiritual demands supersede earthly demands, but do not abolish them; state taxation is not debatable as a religious matter;  and spiritual authority is independent of secular authority.  Characters like Pastor Gordon are trying to build reputations and congregations by appealing to irrational hatred of the government.    You get this sort of thing from the Catholic Church as well when they try to avoid civil and criminal responsibility for clergy sex abuse.  Maddening.
Posted by Anonymous at 4:02 PM