"Man, Am I Going To Whack You, After the Jury Finds You Guilty!" 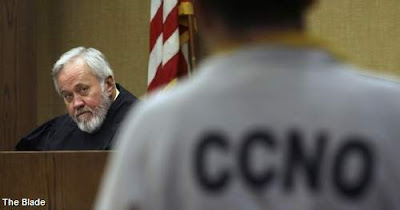 Reporter JC Reindl at the Toledo Blade says that the Ohio Supreme disciplinary panel dismissed a judicial complaint against a Toledo-area municipal judge who in essence warned a criminal defendant that a sanction to be imposed would be less than lenient when the certainty of a jury verdict was rendered.  Here's the story:

"A pending grievance against Toledo Municipal Court Judge Francis X. Gorman was dismissed Monday. The grievance, made public this summer by the Ohio State Bar Association, alleged that Judge Gorman made improper statements to a criminal defendant during a July, 2009, court appearance.

It claimed that the judge violated his obligation to be impartial by making comments about the defendant's lack of cooperation and failures to appear, particularly the statement that the defendant 'take this into consideration when the jury finds you guilty.'

Monday, the three-member panel of the Supreme Court of Ohio's Board of Commissioners on Grievances and Discipline dismissed the grievance, which it found lacking "clear and convincing evidence," said John Marshall, secretary to the board.

'The judge admitted that he said something he didn't intend to say and that he shouldn't have,' said Cincinnati-based attorney George Jonson, who represented Judge Gorman. 'The judge took responsibility for what happened in court that day, and the panel found that it was not something that rose to the level of a violation.' In 'stipulations of fact' accompanying the decision, officials stated that the defendant's case history and behavior would have led Judge Gorman to believe that the defendant was 'playing the FCO [federal court order] game,' and therefore felt free to rack up nonviolent offenses.  Because of a federal court order aimed at reducing crowding in the Lucas County jail, some repeat nonviolent offenders can avoid jail indefinitely if they're willing to be continually picked up, booked, and released within 10 to 12 days, according to court documents.

The grievance against Judge Gorman was dismissed after a hearing before the panel. Asked to comment on the outcome, the judge said 'I am happy that it's concluded and referred further comment to Mr. Jonson."
_____________________________
It is the role of a Judge to maintain "judicial temperament" indicative of the ideal that all criminally accused are innocent until proven guilty.  Judge Gorman clearly deviated from this ideal by his own admission.  Tough job, being a good judge--it's actually pretty amazing how many good judges there are considering all of the provocations they handle.
Posted by Anonymous at 11:49 AM