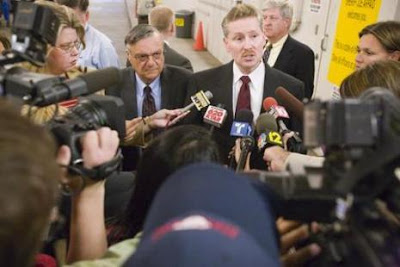 OK, you can read the Bad Lawyer archive of Maricopa County, Arizona stories to get the context if you haven't been following this carnival.

Sheriff Joe Arpaio (America's Toughest Sheriff) and his boy Andy, (former Maricopa County Attorney, Andrew Thomas') engaged in a Stalinistic terror campaign to indict and prosecute all other elected Maricopa County officials not-named-Arpaio-or-Thomas--but, as we suspected all of the charges, indictments, and arrests were false.   Reporters Yvonne Wingett and JJ Hensley at AZCentral relate and supplying links to the US Attorney's summary of his investigation of cases Arapaio and Thomas forwarded to the feds for followup, after numerous dismissals by Arizona courts.  The conclusion by the feds, no evidence of any crimes by any of the Maricopa officials persecuted by Arpaio and Thomas.

"There is no evidence of federal crimes by county officials in material forwarded to federal prosecutors by Maricopa County Sheriff Joe Arpaio and former County Attorney Andrew Thomas, U.S. Attorney for Arizona Dennis Burke says.  Last March, Arpaio and Thomas forwarded nine cases of suspected county corruption to the U.S. Department of Justice's Public Integrity Section for review. Though an attorney working on behalf of Arpaio and Thomas said federal officials promised to review the material, a Justice Department section chief later chastised him for giving the impression that federal agents would likely take on the investigations.

The cases instead were sent to the U.S. Attorney's Office in Phoenix for review.

'Our thorough review has shown that there is a total lack of evidence of the commission of any federal crimes by the individuals listed in the materials,' Burke wrote in a letter to Interim County Attorney Rick Romley. 'Furthermore, in several instances, the evidence was so lacking as to make the theory of liability nearly incomprehensible.'

However, Burke recommended the matters be reviewed for any potential violations of state statutes. Romley, who cannot review the matters because of conflicts of interest, has asked the Navajo County Attorney's Office to perform that task.

'I don't think it would be fair to say that a declination (to prosecute) means there's nothing there,' Driscoll said. 'There's been a review and people are better off than they were at least knowing it's been reviewed.'

The material included Arpaio and Thomas' investigations into the county's project to build a new court tower, and use of public funds to search for listening devices in county offices. Those cases were presented to a grand jury, which determined there was no probable cause that a crime was committed."
____________________________________
So now you have an overwhelming finding of pure political malevolence by these two clowns, Arpaio and Thomas.  Andrew Thomas was soundly defeated in a bid to be the Republican nominee for the position of Arizona attorney general and a bar investigation is underway.

Arpaio's profligate spending on guns and lawyers, including Big Law--ended when the County Supervisors he and Thomas repeatedly and unsuccessfully indicted recently regained control of the county spending authority.  And Arpaio's Sheriff's department is itself on the verge of collapse in the face of corruption investigations and denunciations from former trusted associates.

You gotta give it up for Sheriff Joe, he is the darling of the Tea Party.  He's on the road raising money for all the tin foil hat types, that is until he ends up in U.S. District Court.

But Arpaio's victims: county officials who were arrested, smeared and indicted; and, the taxpayers of Maricpa County, they just keep paying.
Posted by Anonymous at 11:33 PM