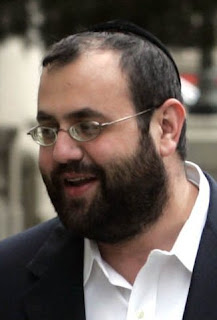 Solomon Dwek (pic) is labeled an "epic fraudster" in a Joe Ryan article about corruption for the Star-Ledger.  Dwek, a former rabbinical student, was the tool of the FBI in its New Jersey corruption sting.  Forty-six public officials, including judges, mayors, and others have been caught up in bribery and other federal offenses.

Dwek came to the attention of the federal authorities as part of their investigation into a $50 million dollar bank fraud.  In exchange for consideration he strapped a small camera around his waist and set up the various persons now on trial in various venues around Jersey.

Dwek will go down in the annals of legendary crooks for a variety of schemes apart from his sting of others.  It is revealed in testimony at the trial of Ridgefield Mayor Anthony R. Suarez that Dwek arranged to pay the premiums of terminally ill and elderly folks who could not afford life insurance premiums.  When the insured died he and his partners including a Yeshiva (a school) collected the policy.  On cross examination Dwek acknowledged collecting $150,000 from "investing in people's deaths."

Karma, anyone?
Posted by Anonymous at 2:29 PM