Your Kid's Bus Driver is a Little Wasted 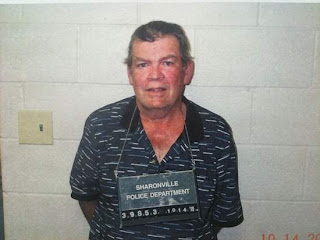 The Cincinnati Enquirer has the story of the local school bus driver arrested after dropping off 33 Colerain High School band members and crashing the school bus into a couple parked cars in a local high school parking lot.  His BAC tested at .229.  In a cooler next to the driver's seat the local police found a nearly empty bottle of Jagermeister, darvocet, and klonopin.  John Dalheimer, 61 faces a cooler full of charges as a consequence.

Amazingly, Dalheimer was still driving a school bus despite an earlier finding of empty booze bottle on the bus within the last year.   Oh, and he had a history of DUI.  So, how is it he had a license enabling him to ferry children around?

One of the kids who was on the bus told a parent after the epidsode that if he had had a cell phone he would have called 911, Dalheimer's driving and behavior was that erratic.  As a local school official noted, this is a "bullet dodged."
Posted by Anonymous at 9:26 AM