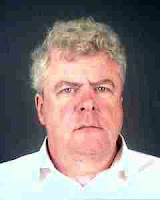 Over the last several days I've brought you a couple of stories about government-employed lawyers engaged in really mind-bending bullshit conduct.  This guy may take the cake, a New York lawyer engage in racial harassment, then again the lawyer stealing from the blind vendor....this is via the ABAJournal with a link to an article by Brenda Lyons and Paul Nelson at the Albany Times-Union:

"A state Department of Civil Service lawyer faces hate crime charges for allegedly threatening to kill an African-American woman and to kidnap a 'little black boy and tie him up' during two separate phone calls over the summer to people of color in his neighborhood, according to court papers.

James J. Hennessey Jr. (pic) attempted to hide the origins of the calls, which occurred on July 19 and July 21, by using a website called www.bluffmycall.com, the criminal complaint states.   Hennessey, 58, was arraigned Friday on two counts of second-degree felony aggravated harassment by Albany City Court Judge William Carter who asked him during the hearing if he could afford an attorney.

'I'm not sure but I think so,' said Hennessey, who was shackled and did not have an attorney representing him. The judge entered a not guilty plea on his behalf and set bail at $15,000.

He told the judge that he worked as a lawyer for the Department of Civil Service and later asked about the payment options for bail. Hennessey, who earns $104,080 a year, had posted bail by 3:30 p.m. Friday, about 90 minutes after the arraignment ended. Outside court, he declined comment when approached by a reporter. It was unclear late Friday if he had retained a lawyer.

Albany police said Hennessey told them he once worked for the New York Police Department. It's unclear if Hennessey had been an officer with the NYPD.  The criminal complaint alleges that at 10:30 p.m. on July 19, a woman on South Pine Street received a call in which Hennessey used racial slurs and expletives and told the woman that he was going to kill her. The court papers state that the woman was targeted because she is 'of African-American origin.'

Two days later at 1:30 p.m., a man on Winnie Street received a call in which the caller told him, 'we are going to kidnap the little black boy who plays outside and tie him up,' according to the criminal complaint. The papers state the man was 'selected because he is of Hispanic origin and has a dark-skinned nephew.'

Authorities were able to trace the calls to Hennessey through documents from Verizon Wireless and a Time Warner Cable account identifying Hennessey as the subscriber.  Albany police were assisted in the probe by the FBI and Albany County district attorney's office.  Police records show Hennessey filed at least two complaints with Albany police several years ago alleging someone had done damage to his home and vehicle.

Hennessey has been employed as an associate attorney with the Department of Civil Service since April 1993, according to David Ernst, an agency spokesman. Ernst on Friday said there was no change in Hennessey's status with the agency."
_______________________
On rare occasions I've come across truly irredeemably racist individuals.   A surprising number have been cops.  While I have represented many cops as well as many municipalities vis-a-vis their safety forces, and I count many cops among my current friends--there is something that I trace to education, bent of mind, and daily exposure to peril that animates this emotional defect among the police.
Posted by Anonymous at 8:16 AM