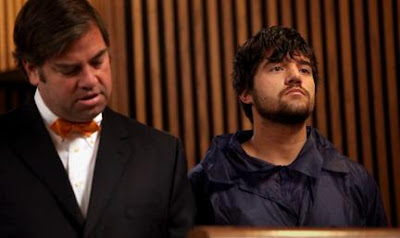 Cleveland Plain Dealer crime reporter Leila Atassi has this account of the murder trial of Matthew Warmus (pic, with legendary Cleveland attorney Edward LaRue) who by various accounts gunned down a parking lot attendant either in self-defense or in some sort of rage over a parking spot depending on who you believe.

"Lawyers for a man on trial for aggravated murder departed from questions about gunshot wounds at today to ask Cuyahoga County Coroner Frank Miller whether his relationship with Prosecutor Bill Mason's office compromises the scientific integrity of his work.   Miller did not have to answer the question. Common Pleas Judge Daniel Gaul sustained a prosecutor's objection to the question posed by attorney John Pyle, which drew on recent headlines that Mason influenced Miller's decision to hire the prosecutor's friend and political ally Patrick Coyne as his top aide.

Pyle and attorney Edward LaRue are representing defendant Matthew Warmus, who is accused of killing parking attendant David Williams -- shooting him twice in the abdomen and once in the head -- during an argument over a parking space before a Cavs game in April.

Warmus claims he acted in self-defense when he retrieved .40-caliber gun from his car and fired on Williams.

An emergency medical responder testified this morning that Williams was wearing an empty gun holster beneath his orange parking vest and insulated jumpsuit, but he did not recall seeing a gun that could have belonged to Williams lying on the ground as some crime scene photos depict.

Prosecutors called Miller among their first witnesses to describe his autopsy of Williams, photos he took of the victim's gunshot wounds and the coroner's homicide ruling.   Miller testified that two bullets entered Williams' abdomen near his belly button and exited from his lower back and right hip. Another entered behind his left ear, severing his brain stem and lodging in his face beneath his right cheek bone. Williams also had a wound on his left wrist that could have been caused by a bullet grazing the skin, Miller said.

[Defense attorney] Pyle began his cross-examination by asking about the gunshot wounds and whether Williams could have continued clutching his gun until he was shot in the head. Miller said it was a possibility. Pyle then asked whether the fact that the coroner's office is funded by the state could compromise the integrity of his work. When Miller said no, Pyle asked Miller if he works closely with [disgraced prosecutor Bill] Mason and whether the prosecutor recommends personnel for Miller to hire.

After Gaul sustained Assistant County Prosecutor Aaron Brockler's objection, Pyle asked Miller if he had ever been called to testify for the defense at trial.   Miller said, "Maybe once."

Miller told Plain Dealer reporters Sept. 8 that Mason and his chief trial lawyer, Steve Dever [put the major squeeze on the Coroner to hire Mason's pals and], told him to hire [a local politician and friend of Mason, Pat] Coyne in exchange for help with his political campaign.   Mason and Dever deny the accusation.  Miller also accused Coyne of pocketing thousands of dollars in campaign cash solicited from other coroner's office employees. The coroner fired Coyne less than two weeks ago, rescinded the termination letter, then fired him again this week, effective Friday.

Typically, the work done in the coroner's lab is based on hard science and is separate from the administrative function that Coyne served, Tobik said. If defense attorneys feel they have reason to challenge lab findings, they are always free to request independent testing, he said."
__________________________________
Here you have excellent criminal defense attorneys seizing on startling revelations that local corrupt politics have also tainted the objectivity of the important function of the elected-Cuyahoga County coroner.  The sheer scale of the bleeding in this county is breath-taking.
Posted by Anonymous at 3:26 PM