Not a Bright Man, Not a Lawyer, Not a Firm Partner 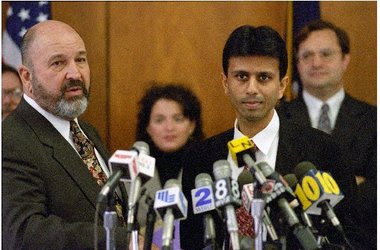 New Orleans Times Picayune writer James Gill has this column on the law firm faux pas of Breazeale, Sachse & Wilson for hiring former Governor, and unlicensed Lawyer, Mike Foster (pic, left with current Governor, Bobby Jindal then a 24 year old boy whiz and member of Foster's cabinet) and featuring former Governor Foster on the firm's website as a "partner," despite his having never taken the Louisiana bar exam or being otherwise admitted to practice law in Louisiana.  Here's Gill's column:

"If you accused a major law firm of having former Gov. Mike Foster as a partner, you could probably be sued for defamation.  For that to be true, it is not necessary to disparage the Foster intellect. What the hell. Let's do it anyway. He wasn't the swiftest governor we ever had.  But, even if he were, anyone employing him as an attorney could be in big trouble, because he has never taken the bar exam.

It was therefore quite a knock on the Baton Rouge firm Breazeale, Sachse & Wilson to suggest that its clients could expect legal advice from Foster in return for their fat fees.  Breazeale, Sachse were in no position to protest, however, and do not appear to have been fazed by the canard that they were harboring a phony. It was their own website that contained what the state Supreme Court found to be 'false, deceptive and misleading information' about Foster, who was identified as 'a government relations specialist and a partner' although he 'is not now nor has he ever been a licensed Louisiana attorney.'

You'd almost think that Breazeale, Sachse, where Foster's son Murphy really is a partner, was touting its gubernatorial connections to drum up business. The firm boasts a governmental relations department, which provides lobbying services and drafts bills for legislators to pass and, sometimes, read.

Banish any unworthy suspicions, because neither Murphy Foster, nor any of the other four attorneys who made up Breazeale, Sachse's management committee, had any idea what was on the firm's website. That was all handled by an office manager, who up and posted the bogus dope on the sly.

It is amazing, when corporate mischief comes to light, how often it turns out that the fault belongs entirely to a relatively humble employee who is no longer around, and so it was here. The office manager has left the company for unrelated reasons, so the motive for spreading 'false, deceptive and misleading information'  can only be guessed at. If the management committee was unaware that Foster père had been transformed into an attorney on the firm's website, unnamed parties outside the firm were more vigilant and a complaint was filed with the state Office of Disciplinary Counsel.

The Disciplinary Counsel investigated and concluded that the management committee was not party to any deception but had broken the rules of professional conduct by failing to supervise 'a non-lawyer assistant.' Evidently whatever the management committee does, it does not do much managing. The Supreme Court accepted the Disciplinary Counsel's findings and issued Murphy Foster et al. a reprimand.

Mike Foster does have a law degree, having concluded, when he became governor, that there wasn't that much to do so he might as well enroll at Southern to fill in the time. Whether he could pass the bar exam will never be known.  He does work as a consultant for Breazeale, Sachse, however, albeit as a layman and no doubt his name has a lot of pull for clients seeking favors from government. It is unlikely that clients came running because they wanted the benefit of Foster's legal brain; his clout as a former governor is the obvious come-on, and listing him as a partner on the website may not have made all that much difference.

Mike Foster is well qualified to provide political advice. He has, for instance, unrivaled experience in the field of ethics, having surreptitiously paid David Duke the hugely inflated price of $150,000 for a list of donors to his Aryan cause. For that subterfuge, committed in his first campaign, Foster became the only sitting governor ever fined by the state Ethics Board. The experience may also have given Foster a unique insight into coincidence, for, no sooner had Duke trousered the moolah, than he abandoned his own plans to run for governor.

In my career I occasionally encountered very dicey relationships between defense law firms and insurers, and third-party administrators (TPA) that seemed to cross those lines.  A major lawsuit filed in OurState concerning the unauthorized practice of law dragged out for nearly a decade and shaped many of the current practices of TPAs in various employment and labor related areas of the law.

As a suspended lawyer, my activities are incredibly circumscribed by a rule of the OurState Supreme Court.  I am not permitted to give legal advice to clients, I am not allowed to talk to clients other than as a "receptionist," and more importantly each of the client matters I work on generates a notice to the client of my status as a "suspended" lawyer, a client can choose to have me not work on their matter.  Amazingly, despite these limitations the incredible folks I work for find value in my efforts--and, provide me with income and health insurance.

I will be forever grateful.
Posted by Anonymous at 10:28 AM