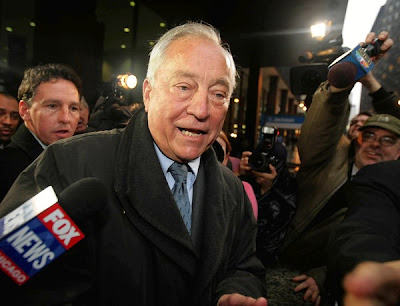 Reporter Andy Grimm at the Chicago Tribune brings us this update on the re-sentencing of the legendary former-Chicago alderman Edward "Fast Eddie" Vrdolyak:

"Some felons sentenced to community service work end up doling out soup at homeless shelters. Legendary political insider 'Fast Eddie' Vrdolyak worked off many of his court-ordered hours by organizing a star-studded fundraiser at Gibsons steakhouse and driving around in his car while recruiting friends by cell phone to aid a charity.  Handwritten log sheets released Wednesday by his lawyers show that Vrdolyak has logged 1,750 hours on behalf of a DuPage County charity that works with law enforcement to help needy children and veterans, mostly by making phone calls and holding "skull sessions" with donors.

In a controversial sentence last year, Vrdolyak eluded prison for a fraud conviction, but after prosecutors complained, an appeals court ordered he be resentenced. Prosecutors are seeking 31/2 years in prison for him Friday.

In the meantime, Vrdolyak has completed more than two-thirds of the community service he was ordered to perform as part of his probation sentence.  The head of the charity, the Illinois State Crime Commission-Police Athletic League of Illinois, praised Vrdolyak's work, saying his networking helped produce its best year and raised hundreds of thousands of dollars that went toward the purchase of 6,500 coats for poor children.

'He's Ed Vrdolyak, you know what I mean?' said Jerry Elsner, the charity's executive director. 'He's tireless. He's Fast Eddie. He's a legend. He's in a different stratosphere than the rest of us.'

Vrdolyak doesn't make his calls from the charity's offices but instead prefers to reach out to friends by cell phone from his car, Elsner said. 'I don't know if he has an office. He always calls from his car,' he said. Vrdolyak's contacts were on display last year at a fundraising luncheon at Gibsons, a favorite hangout for Chicago power brokers, that was attended by 'all-stars of the legal community including the lawyers on Vrdolyak's defense team, as well as Bears linebacker Brian Urlacher.

'There were many, many millionaires there, and that was all Eddie,' Elsner said.

The records show Vrdolyak worked dozens of hours planning the fundraiser and then credited himself for six hours he spent at the fundraiser as well as two hours making thank-you calls later that night.  Photographs from the event on the charity's web site show Vrdolyak mugging with Urlacher, a friend of Vrdolyak's son who wrote a character reference letter for Vrdolyak's first sentencing hearing.

'He's getting into it,' one of Vrdolyak's lawyers, Michael Monico, a guest at the Gibsons luncheon, said of his client's community-service work. 'He's really enjoying it.'

Cook County Democratic Party Chairman Joe Berrios, who also attended the luncheon, said he distributed coats at two sites in the city for the charity. 'Eddie asked me to be a part of it, so I went out there to meet with them,' said Berrios, who is running for Cook County assessor.

U.S. District Judge Matthew Kennelly, who will impose the new sentence, will have dozens of character reference letters to read from Vrdolyak supporters — and he can get an earful about Fast Eddie's virtues from Elsner as well.  'I know I'm going to be crucified for saying this, but Ed Vrdolyak is the finest man I've ever met,' Elsner said. 'You just come away from talking to him feeling better about things.'
__________________________________
By the way this is the link to the Wikipedia entry on Vrdolyak.
Posted by Anonymous at 6:55 AM