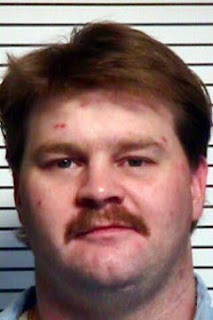 Reporter Randy Kreihbel at Tulsa World is reporting that Oklahoma is scheduled to execute Donald Ray Wackerly II after reaching an accord on the presence of his spiritual adviser, a Buddhist monk.  This is Kreihbel's account:

"Donald Ray Wackerly II is set to be executed as scheduled Thursday after an agreement Wednesday night regarding the death-row inmate's spiritual adviser.


Wackerly, 40, had asked that a Buddhist monk be allowed to accompany him into the death chamber at the Oklahoma State Penitentiary in McAlester before Thursday's execution, scheduled for 6 p.m.   Generally, only the condemned prisoner and corrections officials are allowed in the chamber.   Wackerly's lawyer, Michael Salem, said an agreement has been reached to allow the monk access to the body immediately after the execution is carried out.

Wednesday's was the latest and presumably last twist in Wackerly's case.  In August, the execution of Jeffrey David Matthews was stayed because the state could not acquire a usable dose of sodium thiopental, the sedative used in lethal injections. Production of the drug has been suspended temporarily by its lone manufacturer.   Prison officials proposed a substitute sedative, brevital, but Matthews' lawyer argued that it might not meet the legal requirements for a humane execution.   Death by lethal injection actually involves three drugs: one to anesthesize the prisoner, one to stop respiration, and one to stop the heart.

The state eventually obtained a single dose of sodium thiopental. With Matthews' execution stayed, it was decided to use the dose for Wackerly, who was to have received pentobarbital as a sedative.  Wackerly asked for a stay on the grounds that the execution could not be properly carried out if for some reason the full dose were not administered.   That request was denied.

Wackerly was convicted in 1998 for the 1996 murder of Laotian immigrant Pan Sayakhoummane in rural Sequoyah County.  According to prosecutors, Wackerly developed a robbery scheme, pretended to have car trouble and ambushed the victim when Sayakhoummane, who had been fishing nearby, stopped to help. Sayakhoummane was shot eight times and left in his partially submerged truck."
_____________________________________
Wackerly's death sentence raises the question in my mind about the appropriateness of the sentence in what seems like like the sort of garden variety, heinous robbery and murder.  Since I know nothing about the underlying facts apart from the summary by this reporter, why is Oklahoma killing this inmate when so many similar crimes result in sentences resulting in lengthy prison sentences followed by eventual release?  Is Wackerly an especially bad outlaw?

Isn't this one of the flaws in this crazy quilt system of state sanctioned homicide?  A crime like this in Baltimore might yield a 9-year prison term, but death in Oklahoma.
Posted by Anonymous at 11:17 AM