Advice for CDL: Don't Smuggle Cell Phones to Your Clients 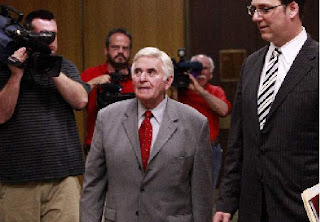 When I was at FCI, Morgantown doing my short federal bit for income taxes I expected to see some "contraband" in other words illegally imported stuff.  Stuff, we the inmates, were not allowed to have, like cigarettes, drugs, hooch, and the kind of thing you saw in the movie Stalag 17.  I did see a lot of illicit cigs but in the few months that I was in optical orange and khaki that was about it.  But the big no-no, was the cellphone.  I've been planning an extended riff on the contraband and specifically, the cellphone, but this morning the ABAJournal had a link to a news report from the DemocratandChronicle.com Rochester, New York which deals with the arrest of attorney Rudolph LePore (pic) who allegedly smuggled a cellphone to a locally-jailed client who used it to escape from jail.  As you might imagine, these allegations have landed LePore in major trouble.  The twist on this story is that LePore is a long time veteran attorney; an excerpt from reporter Gary Craig's story follows:

"After a legal career spanning more than a half-century, local criminal defense lawyer Rudolph LePore now finds himself as a criminal defendant.

The Monroe County Sheriff's Office arrested LePore, 83, on Friday after a grand jury indicted him on a single felony count of promoting prison contraband. Authorities allege that he smuggled a cellphone into the Monroe County Jail — a phone used by Joseph Lee Mitchell and Eddie Palmer in their March 31 escape.

LePore may not have known the telephone would be used to aid an escape, prosecutors say.

LePore pleaded not guilty to the charge. County Court Judge John DeMarco released LePore on his own recognizance [. . .]

Last week, a Rochester woman, Lakesia Binion, pleaded guilty to helping Mitchell and Palmer escape. She admitted that she helped smuggle a telephone into the jail through a third party, an individual not identified in court or court papers.LePore is scheduled to return to court Tuesday [. . . ]

Palmer and Mitchell allegedly sawed through the bars on a second-floor jail window and jumped to freedom. They were caught in Sodus, Wayne County, on April 8 and now face federal and state escape-related charges."
__________________________
I'll revisit the subject of cell phones and contraband.  Here's a link to an FBI article on the subject.  Suffice it to say that a cell phone in fed was the fastest way to get your self a visit to the HOLE/SHU and extra time.
Posted by Anonymous at 8:22 AM