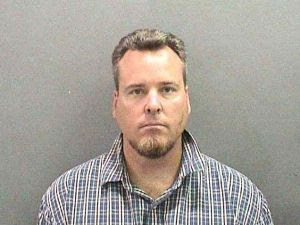 The Orange County Register reports on the $4.75 million dollar payment in settlement of the claim of Elias Aladana who was nearly killed by a Los Angeles County deputy sheriff detective who while drunk crashed a red light and t-boned a Mazda drive by Mr. Aldana.  The other day I was responded to a comment by a reader who remarked that it seemed that I was surprised by the extent to which cops get special treatment in court--this case is another example of just such a pass.  As you will see Sheriff Deputy Moran (pic) plead no contest to a misdemeanor drinking and driving charge adn did not lose his job!  Amazing, keep reading fro Greg Hardesty's article:

"An Anaheim man critically injured when an on-duty Los Angeles County sheriff's detective who had been drinking slammed into his car will receive $4.75 million under terms of a settlement approved by L.A. County supervisors Tuesday.  Elias Aldana, 33 at the time of the June 29, 2008, collision, has racked up more than $2.1 million in medical expenses after suffering traumatic brain injury, internal injuries that required a splenectomy, rib fractures, pelvic fractures, a torn left shoulder and other soft tissue injuries, according to the L.A. County Counsel's Office.

Robert Andrew Moran, 42 at the time and from Buena Park, was working on an investigation and driving an unmarked Chevy Trailblazer patrol unit in Stanton when witnesses say he ran a red light and crashed into the driver's door of a Mazda sedan driven by Aldana.  At the time of the 5:25 a.m. smash-up at the intersection of Beach and Garden Grove Boulevards, Moran was found to have a blood-alcohol level of more than 0.08.

Moran disputed that he had run through the red light but in September 2009, he pleaded no contest to misdemeanor driving under the influence and was sentenced to six months home confinement and put on three years of informal probation.

Moran, an 18-year veteran of the Sheriff's Department at the time of the crash, also was put on unpaid leave but now works as a patrol deputy, L.A. Sheriff's spokesman Steve Whitmore said Tuesday.  Whitmore said that the 'appropriate action' had been taken and that 'in every case, there are mitigating circumstances.'