And Then There's This...Alcoholic Tragedy

At the Oregonian, Aimee Green reports on the tragedy of attorney Shannon Connall.  Here's Aimee Green's account:
"Once prominent defense attorney Shannon Connall pleaded no contest to felony first-degree theft this morning — for an accusation that she stole a client's money.  The plea nearly brings to a close the criminal cases against the 42-year-old, who gave up her Oregon law license last November as the Oregon State Bar investigated allegations that she wrongfully took tens of thousands of dollars of clients’ money.

Going into today's hearing, the Multnomah County District Attorney’s Office hadn’t charged her with any crimes for alleged theft from clients. 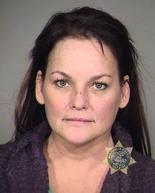 In the roughly 13 years that she practiced law in Oregon, Connall built a name for herself as she teamed up with her dad, long-time attorney and former Multnomah County District Attorney Des Connall. They took on some of the highest profile criminal cases in the state.
The bar is prosecuting Des Connall professionally for alleged misconduct related to the mishandling of clients’ money. If he loses, he [also]faces a range of punishments — including a public reprimand, suspension or disbarment.
Today, Shannon Connall also pleaded no contest to second-degree criminal mischief, a misdemeanor, for a Feb. 4 incident in which she crashed her father’s Cadillac Escalade into two cars in the upscale Northwest Portland neighborhood of Forest Heights. Investigators say her blood alcohol level was 0.27 percent — more than triple the legal limit — and that she left her dad’s car in the middle of Miller Road as friends unsuccessfully tried to “whisk her away.”
In March, she pleaded no contest to drunken driving and entered a diversion program, which requires her to get alcohol treatment, listen to victims of drunken drivers and follow other court orders. If after one year she has done all that’s required of her, the drunken driving charge will be dismissed — in a deal that’s typically offered to first-time drunken drivers who haven’t injured others.
Today, Judge Michael McShane sentenced Connall to five years of bench probation and 160 hours of community service for the criminal mischief charge. McShane didn't sentence Connall on the theft charge. He plans to see if Connall sticks with treatment and follows other court orders before sentencing her for the theft.
Her law license is still listed as active on the Washington State Bar Association's website, but today's felony plea will likely mean she’ll lose that license, too."
_________________________________________
In the wreckage of this life and career you see a talented professional in the throes of the disease of alcoholism, cunning, baffling and powerful.  Absolutely heartbreaking.  Would we condemn Ms. Connall if she did these terrible acts in the grip of another medically-induced psychosis?
Posted by Anonymous at 9:35 PM