You Made the Wrong Decision, B*tch! 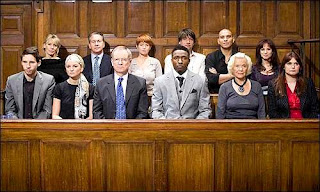 This item properly belongs under the rubric, annals of incredibly stoopid criminals, but will skip the niceties.  An Anchorage, Alaska area-man leaves court last Wednesday after being convicted of misdemeanor theft of a GPS unit gets caught up in traffic in proximity to a female juror who participated in his court case and says something incredibly brain-dead.  This is reporter Rosemary Sinohara's account from the ADN:

"A 29-year-old man had just left court Wednesday after having been convicted by a jury of minor theft when he saw a woman juror in the vehicle behind him in traffic and started yelling at her, Anchorage police say.  Now Jeremiah John Paskewitz faces much bigger trouble. He was charged Thursday with threatening a juror with intent to retaliate against her, a felony that could get up to five years in jail plus fines [ . . . ]


Paskewitz had been convicted in the theft of a GPS unit reported to be worth $228, and of $100 cash. The theft charges were misdemeanors.

The juror, whose name is being withheld by the [Anchorage] Daily News at the request of prosecutors, told police that after the theft trial ended, she unknowingly pulled out of the Hotel Captain Cook parking garage into traffic at Fifth Avenue and L Street behind Paskewitz's Lincoln.
He noticed her, leaned out his window and yelled threats at her over and over, according to a written police statement.   Charging documents say she told police that he yelled, 'You're going to get what's f-----g coming to you, ...You made the wrong decision, b---h.'
The juror said she was able to get behind a police car, but he continued to try to make eye contact with her and shake his head and laugh. She told police she became afraid of him."
_______________________________
Really, who needs this sort of grief after rendering public service as a juror?

Don't talk to the jurors.  Got that?
Posted by Anonymous at 7:48 PM