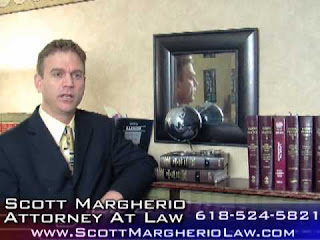 Scott Margherio is out of jail and on his way to some serious disciplinary problems with the Illinois Bar if not outright loss of license.  Margherio, according to a Complaint by the Illinois disciplinary authorities showed up for court blitzed and after lying to the judge about his state of inebriation, ended up in jail.  What follows is from the complaint (via the Legal Profession blawg):

"At approximately 9:00 a.m., on [Friday] October 1, 2010, [attorney Margherio] appeared in the circuit court of Hardin County, Illinois, with the intention of entering his appearance for a defendant in a criminal case.   [ . . . ] When [Mr. Margherio] entered the courtroom, he smelled of alcohol. While waiting for the defendant’s case to be called, Respondent slept at counsel table and then staggered when called to the bench by the presiding judge, the Honorable Paul Lamar.

[ . . . ] Judge Lamar questioned [Mr. Margherio]  about his alcohol use and Respondent denied using alcohol that morning. Respondent agreed to submit to a Breath Alcohol Content ("BAC") test, which showed a breath alcohol content of .06.

[ . . . ] Judge Lamar subsequently held a contempt hearing and found Respondent in direct criminal contempt. The judge sentenced Respondent to be held in the Hardin County jail until Monday, October 4, 2010, at 10:00 a.m. The judge subsequently modified the contempt order to allow Respondent to be released on Sunday, October 3, 2010, at 4:00 p.m."
____________________________________
The ethics complaint against Margherio (at the link his website) also alleges that he lied on his Application to take the Illinois Bar Exam by failing to disclose a DUI conviction.  If sustained this latter "count" will probably cost Margherio his law license under the character and fitness requirements of the the state.  Although in OurCounty there is a sitting judge and former flame-throwing prosecutor who long ago was revealed to have done precisely the same thing.  Different era, I guess.
Posted by Anonymous at 8:33 AM