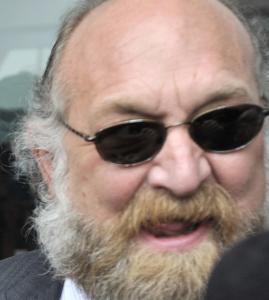 The Boston Globe (with a hat tip to the ABAJournal) reports on the jailing of a CDL (criminal defense lawyer) who was slightly intemperate during a jury empanelment.  Here's the story:

"The fiery attorney who represented former Boston city councilor Chuck Turner in his bribery trial is now headed to jail himself, [Barry P. Wilson (pic) was] sentenced yesterday to three months behind bars after drawing the ire of a judge during jury selection for a murder trial earlier this month.


'Mr. Wilson, your behavior before me two weeks ago was atrocious,’ said Suffolk Superior Court Judge Patrick F. Brady to Barry P. Wilson. He called Wilson’s conduct 'the worst I’ve seen in 20 years on the bench.’  Wilson, a criminal defense attorney who has practiced law for almost 36 years, recently shaved his trademark scraggly gray beard, but he replied to the judge in his well-known booming voice and effusive manner.

'I don’t think my conduct was egregious or out of line in terms of what occurred in court,’ [Wilson] said.

[ . . .]Wilson also represented Garrett Jackson, who was sentenced Tuesday to life in prison for killing a rival drug dealer. During the jury selection phase, Wilson lashed out at the court’s decision to seat a man with a law enforcement background, after dismissing a woman who told the court that her two sons had criminal records.

'How can I look at my client and say he should think this is legitimate after you make a ruling like that and you excuse a woman who had two children. . .’' Wilson told Brady during the May 5 empanelment.

'No way I’m gonna try a case with that man,’' he said referring to the former Department of Homeland Security employee Brady chose to sit on the jury. 'That’s ridiculous. Fifteen years as a federal agent and he’s gonna be unbiased? Are you kidding me? I can’t do it, I won’t do it.  And the other thing is I think maybe if he’s standing outside there you better go ask him if he heard me screaming because I think you gotta excuse him now cause I think he knows I don’t like him,’  Wilson said, according to a typed transcript provided by the Suffolk County District Attorney’s Office.

I've seen this sort of thing a number of times over the years, and in one instance was the object of a Judge who wildly accused me of similar conduct, although the transcript did not reflect any disrespectful behavior and contempt was not sustained.  I suspect that Mr. Wilson's reputation for this sort of thing played against him.  Of course the defense is always:  I was zealously representing my client.  This used to play, unfortunately the rules of ethics have been moving away from this fig leaf for intemperate behavior and language.

But good for Barry Wilson.  Pay the price and get back to work.
Posted by Anonymous at 9:17 AM