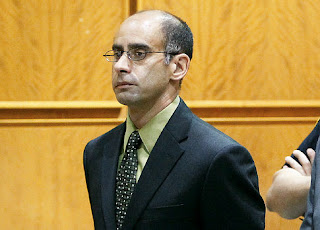 This guy (pic) Daniel Matz emailed details of a trial he was sitting on, causing a mistrial.

The email-happy Queens juror whose mid-trial musings forced a mistrial in a rape case was socked with a $1,000 fine Wednesday.

Queens Supreme Court Justice Richard Buchter levied the fine after juror Daniel Matz pleaded guilty to a criminal contempt charge for dashing off an email to a Bronx prosecutor friend with details from jury deliberations.

Matz, 45, will be locked up for 30 days if he doesn't pay. Buchter estimated he cost the state "tens of thousands of dollars" in lost time.

"There was a tremendous amount of damage done to a number of people," Buchter told Matz. "I think you learned your lesson and I'm going to hit you in the pocketbook because I can't countenance what you did."

Matz apologized to defendant Jose Fernandez as well as the alleged rape victim who will have to take the stand again when Fernandez goes on trial in September for raping the mother of six in 2009.
_________________________
This social networking debacle occurred on day 3 deliberations.  Excellent.
Posted by Anonymous at 1:27 PM