Attorney Michael S. Wade, You Got a Problem, Dude

Lousiville, Ky attorney Michael S. Wade is in a world of hurt for some pretty low brow shiat.  He's under arrest for something like the second time in a couple of days for walking into various local jails loaded down with H, and other stolen stuff.  Here's reporter Charlie White's story for the Courier-Journal: 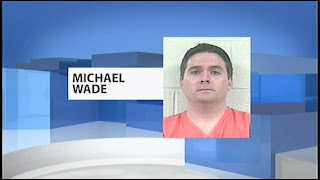 A Louisville attorney arrested Wednesday while visiting his client at the Bullitt County Detention Center is facing additional charges of trafficking in heroin and prescription drugs and receiving stolen property.

Michael S. Wade, 31, of Middletown, remains in the jail on a $50,000 cash bond, which was increased from $5,000 when he was arraigned in Bullitt Circuit Court on the new charges Friday.

County Jailer Martha Weaver-Knox said jail officers found a syringe in the jail during a routine random search early Wednesday morning and began investigating how the needle got into the jail.
Information led them to Wade, who returned to the jail to visit a client just before noon Wednesday. Officers patted him down and found heroin, tobacco and rolling papers, Weaver-Knox said.
Kentucky State Police initially charged Wade with promoting contraband within the jail and possession of a controlled substance.

On Thursday, state police got a search warrant and began searching his vehicle in the jail parking lot, where they found heroin, syringes and prescription pills, state police said.

So Michael Wade sounds like in addition to his small law practice, he was working the drug dealer, petty grifter biz in order to feed his habit.  You have no idea how much of this sort of thing goes on.  Seriously sad.
Posted by Anonymous at 5:59 AM