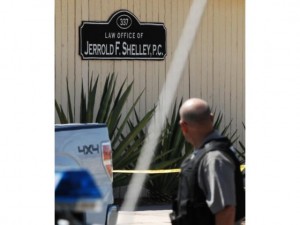 In gun-insane states like Arizona, Colorado, Tennessee, Texas (where a man proudly showing off his piece killed another at a Memorial Day party), and soon Ohio we've come to expect this madness--an angry, disaffected man with easy access to guns goes on a rampage.  While I was at FCI, Morgantown I watched the day room televisions, stunned at the massacre perpetrated by Jared Lee Loughner who numbered among his victims, Congresswoman Gabrielle Giffords.  Again yesterday, a family law attorney Jerrold “Jerry” Shelley, aged 62, who was planning to retire from the profession, today, was gunned down by an elderly man holding a grudge over his wife's divorce from him 5 years earlier.  She, too, was a victim of the murderous rampage.

Soon Tennessee and Ohio will join the ranks of those states encouraging the gun-toting citizenship to bring their firearms into bars and restaurants.  The insanity never ends.

﻿ Note:  this morning I, warily, came down to my office on Public Square in OurTown having seen a local news report of gun play just outside.  Television crews had their satellite turcks outside.  The restaurant on the ground floor received the damage reflected in the picture to the left.

Three gunshot victims are receiving intensive care at a local hospital.  Sheeeesssshhh!
Posted by Anonymous at 8:23 AM