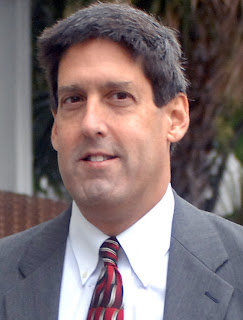 Jay Weaver at the Miami Herald covers the sentencing of Dr. Alan Mendelsohn (pic) the Florida opthalmologist and political lobbyist.  The federal prosecution of Dr. Mendelsohn (once again) peels back the cover on Florida's amazingly corrupt political culture.  Mendelsohn's last political fundraiser (while he was under incitment) was for Florida's new Tea Party US Senator, Marco Rubio.  Nice.

Mendelsohn is a dramatic example of how not to approach your white collar sentencing.  This is an excerpt from the Herald account, by Mr. Weaver:

U.S. District Judge William Zloch slammed a respected Broward County physician with a four-year prison sentence on Wednesday, sending a strong message against the corrupting influence of special-interest lobbyists who raise millions for politicians in Tallahassee -- in exchange for favors.

Zloch told Dr. Alan Mendelsohn, 53, a politically connected ophthalmologist, that the hefty sentence was warranted because his pay-to-play misconduct was like a “cancer” with “tentacles” that thwarted good government from South Florida to the state capital.

Mendelsohn was the key figure in a public corruption and tax case that saw him secretly divert $700,000 from campaign donations and other income to himself, his family and his mistress. He did not report that money to the IRS.

Some of the donations were made after Mendelsohn, an unregistered lobbyist, bragged to special interests in major industries about his purported connections to then-Gov. Charlie Crist, lawyers on the attorney general’s staff and state legislators. Mendelsohn served on Crist’s transition team in 2007.

[ . . . ]
At the plea hearing, he told Zloch that if influential insiders didn’t pay political bribes in Tallahassee, they would be “toast.”

On Wednesday, Zloch said the Justice Department’s recommended prison sentence for Mendelsohn, between 2 and 2½ years, and his defense attorney’s bid for probation with no jail time, failed to address the seriousness of his criminal behavior.

The judge, sitting ramrod straight on the bench, condemned Mendelsohn for orchestrating schemes in which political donors contributed hundreds of thousands of dollars to obtain legislative favors behind the scenes.

“A message must be sent to the public that corruption of this scope cannot and will not be tolerated,” Zloch told a packed Fort Lauderdale courtroom, which included some supporters who gasped, “Oh my God” when the judge issued the hefty sentence, along with a $10,000 fine.

Mendelsohn pleaded guilty last year to conspiring to defraud the U.S. government by failing to report to the IRS $700,000 in income siphoned from his PACs, his lobbying clients and his medical practice. Mendelsohn, who raised money mainly from Republican donors, pleaded to a single conspiracy charge, which carried a five-year maximum sentence.

Mendelsohn spent the political proceeds on a mistress, as well as his children’s private high school tuition, SAT tutoring, a luxury car and home renovations, according to court records. He also admitted lying to FBI agents.

Before the sentencing, Mendelsohn asserted he had suffered enough from his misconduct. Entin filed 350 letters from supporters seeking leniency for his client.
____________________________
The arrogance of this defendant did not play well at his federal sentencing.  It may not seem much when you read about the length of sentences that run to multiple decades or life, but the difference between a 2 years and 4 years is like an eternity for a guy like Mendelsohn.  This was clearly a pissed off judge.
Posted by Anonymous at 10:23 AM