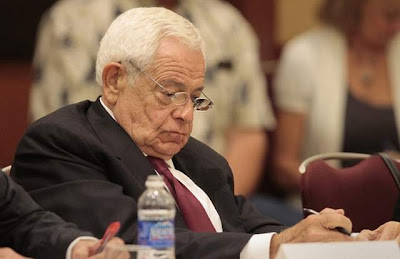 The Cincinnati Enquirer offers its view of what Stanley Chesley stands to lose.

I find this article extremely beside the point.  Whatever Chesley stands to lose, he's already lost it.  Money? Chesley has so much that it's superfluous whether he gives up millions as ordered by the Kentucky Bar authorities.  Reputation?  Already gone.  Influence? Now this is where the Enquirer seems to be casting its eye--Chesley having long been a Democratic player, an FOB (friend of Bill.)  President Clinton appointed Chesley's wife Susan Dlott to a U.S. District judge slot.  Chesley made former Ohio Treasurer,  Cincinnati-area prosecutor, and  Republican operative, Joe Deters, a law partner. But as we saw last week, that was no prophylactic to loss of Ohio's Class Action business.  So reporters Jim Hannah and Dan Horn at the Enquirer think Chesley stands to lose political clout.  Or maybe influence in Jewish or charitable circles.

A friend standing over my shoulder while I write this says Chesley should go to prison.  My friend, a noted Class action lawyer in his own right, says Chesley should lose his freedom.  Chesley participated in a criminal venture that stole millions from clients--amazingly the recommendation of the Kentucky Bar authorities is that Chesley should only disgorge a relatively small portion of the fees he and his conspirators claimed as a part of this heist.

What does Chesley stand to lose?  Who cares.  What did the legal and client community lose by Chesley's crime?  A champion, a hero, some one who symbolically stood for little guys against corporate culture of greed and negligence.
Posted by Anonymous at 8:35 AM