Covering Up for Disgraced Judge in Knox County Tennessee 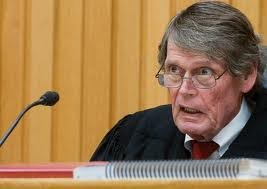 The Knoxville News Sentinel is going to court to get the sealed records on former Knox County Judge and pill head, Richard Baumgartner (pic) who when revealed to be a drug addict, quickly resigned and plead guilty to official misconduct.  Baumgartner received "diversion,"  avoided jail, and probably will have his record expunged.

Big problems erupted in Tennessee over whether the judge was impaired throughout various murder and other cases he presided over.

As opposed to say, Cuyahoga County, Ohio these Tennessee public officials know how to do cover up--someone has gone so far as to scrub files relating to issues concerning the Judge Baumgartners issues including the public and court files of other defendants impacted by the Judge's official misconduct.  Nice.
Posted by Anonymous at 6:25 AM