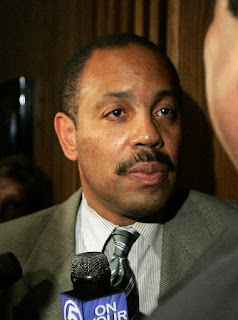 The judge, who was on leave, immediately resigned. He was accused of fixing a forclosure case at the request of his political mentor, then-county Auditor Frank Russo.

The guilty verdict came after a weeklong trial during which Russo testified that he asked Terry to deny a motion in the case and prosecutors played a secretly recorded telephone conversation of Terry telling the auditor he had denied the motion.  "Very good," Russo could be heard saying. "Very good."

Despite the damning testimony, Terry took the stand in U.S. District Court and argued that he had been unaware of Russo's interest in the case and did nothing wrong in denying the motion.  Terry is the second common pleas judge convicted of wrongdoing as part of a federal investigation of corruption in the county. In March, a jury convicted former Judge Bridget McCafferty of lying to the FBI about cases on her docket. Her sentencing is scheduled for July 11. [ . . . ]

The corruption investigation has implicated more than 50 elected officials, public employees and contractors since becoming public in July 2008 with FBI raids of businesses, homes and county offices.
_______________________
There arre at least ten other Cuyahoga County judges who are quivering in their wing tips and pumps this afternoon, if the trial testimony by Russo stands up to scrutiny.

Posted by Anonymous at 2:44 PM