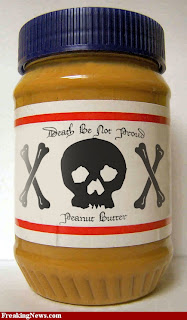 An AP story out of Battle Creek, MI has the earmarks of a good law school or bar exam question.

The ex-wife of a local gentleman is aware that the new wife has a severe peanut allergy.  So mail ex- sends to her husband is smeared in peanut butter, and the outside of the envelope warns the person handling the envelope that this is the case.  Assault and battery?

Here's an excerpt from the Associated Press story: