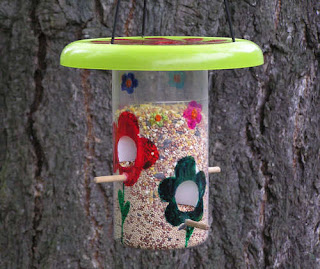 The city of Cuyahoga Falls will not enact an ordinance afterall to mandate that residents clean up their damn bird feeders!  Reporter Gina Mace has this breaking news coverage:

A controversial ordinance that would have required Falls residents to clean up their birdfeeders is dead.  Ward 7 Councilman Jerry James said property maintenance laws already on the books make the proposed new ordinance unnecessary.

The posting created quite a flap prompting angry responses from bird lovers from as far away as India [ . . . ]

James had asked his colleagues on council to consider the new rules after a resident complained that their neighbor in River Estates had about 10 bird feeders in their yard.  George and Mila Theiss complained that neighbor Donna Klett's feeding of birds, squirrels and chipmunks is the culprit for mice in the neighborhood.

James said he has discovered there are three ordinances on the book that cover the situation.  ''Maybe we can enforce the ordinances we have,'' James said.

Development Director Sue Truby, who oversees the housing division, said Klett was given orders in February to clean up her patio, which she did.  Other visits by a housing inspector at the request of the Theisses did not result in violations, Truby said.

A proposed ordinance to regulate compost piles is in the city, also sponsored by James, is on hold.

Despite a month of bad publicity and stress that James called ''for the birds,'' he said he is not ashamed of proposing what has come to be known as the ''bird feeder ordinance.'' ''I would do it again in an instant if I thought it was helping my constituents,'' James said. ''What I did over the past four weeks is what I thought I had to do for people I represent.''
_________________
Wow a brave law maker.
Posted by Anonymous at 5:33 AM