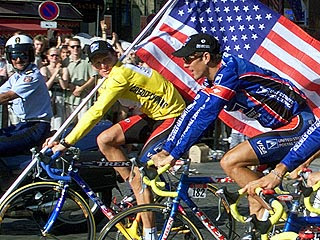 Last week, I attempted in my shallow way to highlight the obnoxious and manipulative demand from two of Lance Armstrongs (army of ) attorneys to the effect that 60 Minutes apologize to Armstrong for Scott Pelley's feature built around an interview of Tyler Hamilton the disgraced former Olympic gold medlaist and Armstrong teammate.   Tyler Hamilton, of course, revealed the systematic doping of Armstrong and US Postal Cycling during Armstrong's decade at the top of world cycling.  Hamilton did this by telling what he saw and what he and Armstrong did.  Hamilton's account corroborated a growing body of testimony about doping by Lance, US Postal and Discovery cycling teams.

This afternoon I read the brilliant rebuttal by Patrick Hruby at the Atlantic to Armstrong's lawyers manipulative demand.  Cycle helmet tip to VeloNews, as usual, for the best in cycling coverage including the terrific"Explainer" pieces by my friend, VeloNews' editor, and great young lawyer, Charles Pelkey.
Posted by Anonymous at 6:03 AM