"You Better Apologize 60 Minutes or Else!" 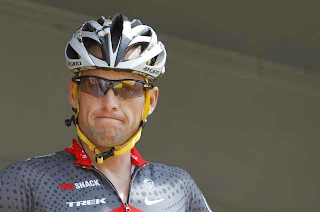 News on the Lance Armstrong-front includes his hiring a couple of west coast heavy hitters previously involved in the Balco matter.  And then there's the demand by a couple of soldiers in Lance's army of lawyers that 60 Minutes apologize because information about a positive drug test by Armstrong described by Armstrong's former teammate Tyler Hamilton in the televised interview might be inaccurate in some respect.    This is from the LATimes:

Lance Armstrong's lawyers aren't sure whether a "60 Minutes" report linking their client to a positive doping test was "extraordinarily shoddy" or just plain "vicious."  Either way, they want an on-air apology from the TV news program and have demanded one in a letter sent Wednesday to CBS News Chairman and “60 Minutes” executive producer Jeff Fager.

“In the cold light of morning your story was either extraordinarily shoddy, to the point of being reckless and unprofessional, or a vicious hit-and-run job,” lawyer Elliot Peters wrote. “In either case, a categorical on-air apology is required.”  Peters added that the show ignored evidence from Armstrong's camp prior to the broadcast that the Swiss-related claims were false.  “What is particularly disturbing is that '60 Minutes' had access to the true facts, could easily have verified them, and apparently chose instead to broadcast untruths and then layer innuendo on top of the falsehoods,” Peters said.


CBS News spokesman Kevin Tedesco said Wednesday he was unable comment on the letter, but added about the "60 Minutes" report: “We consider this the most thorough investigation into doping in the sport of cycling ever done.”

In the May 22 report, former teammate Tyler Hamilton said Armstrong claimed he used the banned substance EPO in preparation for the 2001 Tour de France and that the International Cycling Union [ed. UCI] helped him hide a positive test from the Tour de Suisse earlier that year.  But last week Martial Saugy, head of Switzerland's anti-doping laboratory, denied allegations that Armstrong had failed a doping test during the 2001 Tour de Suisse. He added that his lab did find suspicious levels of EPO in four urine samples from the race, but he didn't know if any of them belonged to Armstrong.
Saugy also denied that UCI officials brokered a meeting between Armstrong and his lab, as reported by "60 Minutes." He did meet with Armstrong and then-U.S. Postal Service team manager Johan Bruyneel, but it had nothing to do with suspicious test results.
_______________________________________
This sort of tactic is classic distraction and public relations manipulation.  On the pretext of the mere denial by an alleged participant in potential wrongdoing, lawyers for Lance self-righteously scream that Armstrong was wronged by the press because they reported the allegations of Tyler Hamilton.  They demand an apology.

The Catholic Church did precisely this sort of thing in the press.  One of the Church's lawyers ran around the country threatening civil and criminal prosecutions for false claims.  When I deposed this lawyer (who happened to be a Auxiliary Bishop) he admitted under oath that there were no false allegations.

Is it possible that Tyler Hamilton is lying?  Sure.  Is it possible that Hamilton is wrong?  Very possibly.  But in my opinion, it is far more likely that Hamilton is mistaken about certain immaterial details and substantively right about doping.  My opinion is based on the sheer weight of versions now emerging from various sources including other teammates and former confidants.  Witness testimony is often mistaken or inconsistent in details without discrediting the underlying substance of the witness accounts.    A for-instance comes readily to mind:  a young girl testified in a case that something happened on a certain date and that she and her sister were watching a certain Disney video.  It turns out that the Disney title had not been released in the video format described by the young witness.  This detail was immaterial, because other evidence, forensic, physical, and testimonial was overwhelming as it pertained to the relevant issue to be decided.

So Lance figures a good offense is the best defense.  We shall see.
Posted by Anonymous at 6:32 AM