Homeowners Foreclose on Bank of America 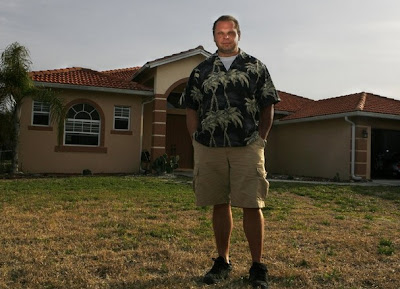 The Naples Daily News featured this great story (reporter Steven Beardsley) on homeowners turning the tables on Bank of America:

Warren (pic) and Maureen Nyerges know how difficult it can be to get Bank of America’s attention.  When the lending giant mistakenly attempted to foreclose on the couple’s cash-purchased Golden Gate Estates home in 2010, they spent weeks on the phone and in court before the case was dismissed.

A judge ordered the bank to pay $2,500 in attorney fees for the couple’s troubles. Yet after five months and even more phone calls, neither the bank nor its local counsel had paid.

Friday morning, the couple opted for a different tactic. Media in tow, their attorney arrived outside a Davis Boulevard branch of the bank with deputies, a moving company and the court’s permission to seize branch assets.

“I’m either leaving the building with a whole bunch of furniture, or a check or cash or something,” the attorney, Todd Allen, vowed.

It was a scene that turned the foreclosure crisis on its head, if briefly. Collier County sheriff’s deputies entered the bank shortly after 9 a.m., located the bank manager and presented him with a court writ and a familiar choice: Pay the money or prepare to lose possessions.

The Daily News first reported on the Nyergeses in 2010, after Bank of America filed a foreclosure complaint against the pair.

The lawsuit came as a surprise. Not only had the couple never defaulted, they had no mortgage to default on, having paid cash for the 2009 purchase of a single-story, 2,700-square-foot home owned by the bank.  For nearly two months, Warren Nyerges, 46, a former sheriff’s deputy in Ohio, fought the lawsuit on the phones and in a Collier County courtroom. He worked with a local branch to clear up the misunderstanding, and he filed a motion to dismiss the case and a motion for fees.

Bank of America voluntarily dropped the suit in April, and a judge granted the motion for fees in December.  Some five months and repeated phone calls later, neither Bank of America nor its local counsel, the David J. Stern law firm, had paid the judgment or responded to Nyerges [ . . .]
In January, the couple hired Allen, a foreclosure defense attorney. When Allen’s attempts to have the judgment paid also failed to produce a response, the attorney sent letters to Bank of America’s general counsel, warning he would pursue a levy.   With no response, Allen obtained a writ of execution from the court — permission to seize assets to satisfy a judgment — and he forwarded it to the Sheriff’s Office. Warren Nyerges paid a $10,000 bond, and the agency hired a moving company [ . . . ]
“We apologize to Mr. Nyegres that there was a delay in receiving the funds,” Christina Beyer wrote. “The original request went to an outside attorney who is no longer in business [ . . .]
________________________________
Bravo.