When Judge Gaines Throws the Book at You, Watch Out! 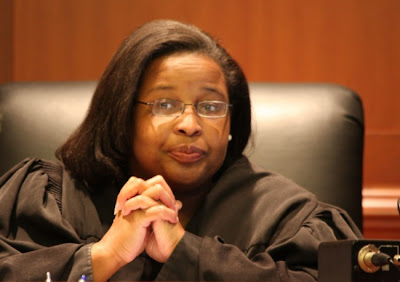 Atlanta Municipal Judge Crystal Gaines (pic) apparently thinks she's a federal judge the way she hands out the time.  Municipal court judges are limited by Georgia charter to handing out no more than 6 month sentences in their courts.  This, um, limitation has not inhibited Judge Gaines who keeps her municipal court defendants on paper for YEARS.  Here's Christian Booth's story from the AJC.com:

If you've received a sentence of more than six months from an Atlanta Municipal Court judge, you might want to continue reading.

Attorney Jackie Patterson said his client, Anthony Brooks, was sentenced to 48 months probation last fall by Chief Municipal Court Judge Crystal Gaines on two counts of marijuana possession and two counts of driving with a suspended license. The sentence -- 12 months per count -- exceeds the limit mandated in the city's charter, said Patterson, adding his client is not the only one affected.

"This is happening all the time," said the attorney.

According to Section 4-102, Article 5, punishment for violations may not exceed a fine of $1,000 "or imprisonment for six months." Probation and imprisonment are interchangeable[.]
____________________________________
There is some debate according to the article about the jurisdiction of the court in sentencing, but 48 months, is probably way beyond even arguable power in the Atlanta city municipal court.
Posted by Anonymous at 7:47 AM