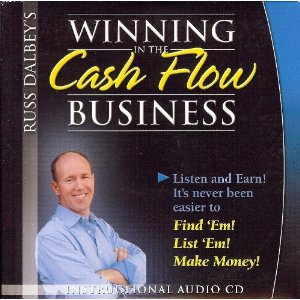 'Winning in the Cash Flow Business' is apparently a losing proposition.


Russell Dalbey, CEO of the company behind the 'Winning in the Cash Flow Business' infomercials, hawked a "wealth-building" system that he said would help consumers earn money easily by brokering sales of privately held mortgage notes.

'Find 'Em,' 'List 'Em,' and 'Make Money,'  Dalbey urged would-be entrepreneurs in 30-minute infomercials that aired on cable stations since at least 2002. He guaranteed that buying his materials would teach consumers how to make money fast by ferreting out privately held, seller-financed mortgages and then earning commissions by hooking the note holder up with a buyer.

But consumers said it wasn't that easy, and the Federal Trade Commission agreed.   On Tuesday, the agency said it had filed suit against Dalbey and his Colorado-based company, the Dalbey Education Institute, accusing him of violating the FTC Act by misleading consumers about their potential earnings.

In an unprecedented move, the FTC said it also sued a shill who mislead potential buyers about her earnings.

Consumers typically started with an investment of up to $150, but were enticed to buy upgrades or 'VIP' materials that purportedly help them earn more.

One Ohio woman spent more than $30,000 on materials from DEI, she said in a sworn statement. Despite quitting her bartending job to work on DEI's programs full time, Kathi Yevtich of Delphi said in an affidavit, she only sold a single promissory note, earning just $500.   When she finally realized that she would never close the 10 deals DEI guaranteed, she sought a refund, she said in the statement, but the company ignored her.

The infomercials were a cable TV staple. Consumers who didn't buy may remember them because TV personality Gary Collins served as host on some. He was not named as a defendant in the suit.

Dalbey was the main pitchman and sold similar programs online or through direct mail as America's Note Network before hitting on the informercial format in 2002, the suit said. He told viewers in one infomercial, 'Now, the truth is anyone can make a ton of money or even become a millionaire and you don't need money or college or even talent to do it.'

Although Dalbey claimed he became wealthy using his system of brokering promissory notes, the suit said he made the bulk of his money by defrauding consumers. The suit claimed the company used testimonials from shills who mislead people about how much – or how quickly – they earned money through the progra.

The FTC's suit named Marsha Bowersock Kellogg, an Ohio resident who, in a testimonial, claimed she made more than $79,975 from a single brokered sale. But the FTC said she made only $29,975 from that sale.

The FTC said it was the first time it had charged a shill in a case. Kellogg signed a consent agreement in which she promised not to make misleading statements about products.   The suit, filed in conjunction with the Colorado attorney general's office, was filed in federal court in Colorado."
_______________________________
The shill, get's sued.  That's an interesting development.  It would be great to see what her story is.
Posted by Anonymous at 5:58 AM