Facebook has refused to take down a page advocating violence against cyclists accordig to SFStreets.org. 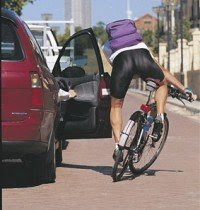 I suspect that the site may be ironic, but cycling advocates have been demanding FB take it down.  FB has refused, according to SFStreets.org.

The Bad Lawyer Blawg is written by both a Bad Lawyer and a cyclist.  In the latter category, the Bad Lawyer has twice fallen prey to malicious motorists and once to a clueless driver.  Nonetheless, I continue to ride.

I'm with FB, on this one.  As a much wiser cycling-journo-attorney told me recently, the facebook site creates an interesting resource for the police and prosecutors to look at when investigating driver-crimes against cyclists.  One of the elements that sealed the deal for the prosecution of Dr. Christopher Thompson was his prior acts.  I wonder if he'll be able to link to this site from his prison cell where he will be spending the next 5 years?
Posted by Anonymous at 1:03 PM