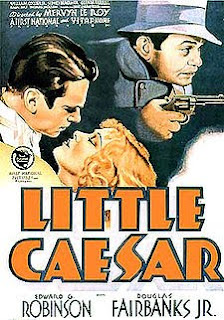 The Department of Justice has informed the press and Maricopa County County Attorney, Andrew Thomas that he's a big fat liar.   Thomas explained his voluntary dismissal of his and Sheriff Joe Arpaio's federal civil RICO lawsuit against other Maricopa county officials and state court judges by saying the Justice Deaprtment was taking over the investigation.

A DOJ letter to Thomas and the media strongly chastizes Thomas for misrepresenting the conversations with DOJ officials, according to azcentral.com.  This Bad prosecutor is going down even his attempts at face-saving are blowing up.

Here's the thing about RICO lawsuits, --and yes, the Racketeer Influenced and Corrupt Organization Act was given its acronym in homage to Edward G. Robbinson who at the end of  the movie Little Ceasar exclaims in his dying breath, "Is this the end of Little Rico?"--18 U.S.C. § 1961–1968 is a federal statute that provides for criminal and civil prosecutions of the mob and anything that looks like the mob.

As we talked about last night in reporting on the federal judgment that the former mayor of East Chicago, Indiana and his political cronies had turned the city government of East Chicago into a mobbed-up organization.  Civil penalties as you can see from those assessed against former Mayor Pastrick are pretty onerous; on the otherhand, failure to set out a properly plead civil RICO action can cost the lawyer who files the action some pretty heavy civil penalties in the form of back-breaking sanctions under Federal Rule 11.

The complexity of what must be shown and the detail with which federal courts require elements which must be plead comprise treastise and journals dedicated to the purpose of keeping lawyers out of the Rule 11 woodshed.  This is an area of law that is not unlike a minefield in which the naive and inexperienced are wll-advised not to stray.  Um, I know from experience.
Posted by Anonymous at 6:26 AM