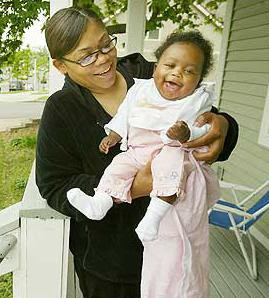 Malaika Brooks (pic) a pregnant African-American woman got a ticket form the Seattle police sometime in 2004 for going 32 mph in a school zone.  Like many of us, she was angry feeling the citation was unjust. She refused to sign the ticket, so the cops tasered her, twice!

Mrs. Brooks sued.  The U.S. District Court trial judge permitted her case to proceed over motions to dismiss filed by the cops.  Seattle appealed.  Get this the 9th Circuit Court of Appeals has held (link is to the opinion) that tasering a pregnant woman over a traffic citation was not a denial of her constitutional rights, ARE YOU F%&%(&$g KIDDING ME!!!!!

Seriously, I expect to see outrageous stuff at local news websites, this story is one of those where you have to ask yourself if you are living in 2010.  Here's Gene Johnson's report from the Seattle Post Intelligencer website:

"Malaika Brooks was driving her son to Seattle's African American Academy in 2004 when she was stopped for doing 32 mph in a school zone. She insisted it was the car in front of her that was speeding, and refused to sign the ticket because she thought she'd be admitting guilt. Rather than give her the ticket and let her go on her way, the officers decided to arrest her. One reached in, turned off her car and dropped the keys on the floor. Brooks stiffened her arms against the steering wheel and told the officers she was pregnant, but refused to get out, even after they threatened to stun her.

The officers - Sgt. Steven Daman, Officer Juan Ornelas and Officer Donald Jones - then stunned her three times, in the thigh, shoulder and neck, and hauled her out of the car, laying her face-down in the street. Brooks gave birth to a healthy baby two months later, but has permanent scars from the Taser. She sued the officers for violating her constitutional rights, and U.S. District Judge Richard Jones allowed the case to continue. He declined to grant the officers immunity for performing their official duties and said Brooks' rights were clearly violated.

But in a 2-1 ruling Friday, a panel of the 9th U.S. Circuit Court of Appeals disagreed. Judges Cynthia Holcomb Hall and Diarmuid F. O'Scannlain held that the officers were justified in making an arrest because Brooks was obstructing them and resisting arrest. The use of force was also justified because of the threat Brooks posed, Hall wrote: 'It seems clear that Brooks was not going to be able to harm anyone with her car at a moment's notice. Nonetheless, some threat she might retrieve the keys and drive off erratically remained, particularly given her refusal to leave the car and her state of agitation.' They also noted that the force used wasn't that serious because the Taser was in 'touch' mode rather than 'dart' mode, which hurts more. They reversed the lower court's opinion and held that the officers were entitled to immunity from the lawsuit.

The officers' lawyers, Ted Buck and Karen Cobb, said the officers made the right decision under the circumstances they faced.  'Police officers have to have the ability to compel people to obey their lawful orders,'  Buck said. 'That's all the court recognized today. The 9th Circuit just applied the law instead of getting caught up in the otherwise unfortunate factual circumstances.'

The majority's opinion outraged Judge Marsha Berzon, who called it 'off the wall.'

'I fail utterly to comprehend how my colleagues are able to conclude that it was objectively reasonable to use any force against Brooks, let alone three activations of a Taser, in response to such a trivial offense,' she wrote.  She argued that under Washington law, the officers had no authority to take Brooks into custody: Failure to sign a traffic infraction is not an arrestable offense, and it's not illegal to resist an unlawful arrest. Berzon said the majority's notion that Brooks obstructed officers was so far-fetched that even the officers themselves didn't make that legal argument. To obstruct an officer, one must obstruct the officer's official duties, and the officers' only duties in this case were to detain Brooks long enough to identify her, check for warrants, write up the citation and give it to her. Brooks' failure to sign did not interfere with those duties, she said. Furthermore, Brooks posed no apparent threat, and the officers could not have known how stunning her would affect the fetus, or whether it might prompt premature labor - another reason their actions were inexcusable, Berzon said.

Brooks' lawyer, Eric Zubel, said he would ask the 9th Circuit to rehear the case.'This is outrageous - that something like this could happen to a pregnant woman, in front of an elementary school, at 8:30 in the morning, to someone who posed no threat whatsoever,' he said."
_______________________________________
I believed that the federal courts were defenders of liberty and civil rights, but that was just one more delusion.
Posted by Anonymous at 5:43 AM