Marrying for Money, That's Illegal in Kentucky, No Kidding! 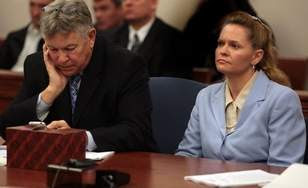 The Cincinnati Enquirer has this incredible story of the widow convicted of "exploiting an adult" under a new Kentucky Criminal statute.  The widow, Cathleen Kenter-Nevins faces 10 years on 3 counts of exploiting her husband, a mentally and physically handicapped adult 27 years older than her.  Here's a excerpt from Jim Hannah's story:

A 40-year-old Burlington woman was convicted Tuesday of financially exploiting a man 27 years her senior [...the prosecution] was unique because the defendant, Cathleen Kenter-Nevins, was the first person charged with the felony to go to trial and receive a verdict, Boone County Commonwealth’s Attorney Linda Tally Smith said.  'It was plowing new ground in that aspect,”'she said.
[. . .] Senior Judge Steve Jaeger sentences her April 15 in Boone County Circuit Court.

The law had been in effect 33 months when a grand jury indicted Kenter-Nevins in March 2008. Court records state she stole about $1 million from Danny Nevins, a mentally and physically impaired man who died in March 2008 at the age of 66 after being hospitalized with pneumonia.  Kenter-Nevins declined to comment on the verdict as she rushed out of the courtroom with a Global Position System monitor strapped to her ankle that tracks her whereabouts while she’s free on bond.

Jaeger handed down his verdict in the bench trial that stretched from April 16 to Oct. 19 when prosecutors submitted their closing arguments in writing. The trial was plagued with lengthy delays that included defense lawyer Charles Schaffner claiming that prosecutors withheld evidence.  While Jaeger refused to declare a mistrial after the claim of prosecutorial misconduct, Smith said the defense lawyers contentious personalities had threatened to turn the trial into 'a farce.'
The trial started when [defense attorney] Schaffner used his opening statement to compare the case to a story by Damon Runyon, famous for writing the story on which 'Guys and Dolls'  is based. He told Judge Jaeger that the witness list was filled with odd people and gamblers, whom he described as 'colorful characters.' His characterization of the trial came to fruition as witnesses were called to describe how Kenter-Nevins befriended Nevins at an Indiana riverboat casino, married him in the back seat of a car in Tennessee and stole his money by selling off his family homestead near Dayton, Ohio, for $1.1 million – $2 million less than the asking price.

A retired sea captain who briefly moved to Kentucky to breed thoroughbreds even took the stand to say Kenter-Nevins confessed to the crime. Despite the damning testimony, the retiree confessed his love for Kenter-Nevins and said she remained the beneficiary of $100,000 in his will. Kenter-Nevins, a self-confessed gambling addict, was nearly broke when she met Nevins in March 2006, according to court records. Smith said during the trial that Kenter-Nevins must have thought she had 'hit the jackpot' when she was introduced to wheelchair-bound man.

Nevins was an eccentric man who was the child of elderly parents, his father being 75 when Nevins was born. He lived off a trust fund in the family’s Dayton, Ohio, area mansion with about 50 cats until the home became so dilapidated he moved to a motel. He liked to travel, eat at Bob Evans and hang out at a Fifth Third branch where he showered his favorite tellers with 13-pound boxes of chocolates. Nevins gave several people power of attorney over his affairs over the years. They all made questionable financial decisions on his behalf before he met Kenter-Nevins, according to court records.

A month before the pair met someone else took Nevins to Las Vegas where they stayed at the Stardust Resort & Casino and spent an estimated $40,000, those records state. Another person with power of attorney let Nevins’ health insurance lapse, something he didn’t know until he was hospitalized with a stroke in September 2005. Kenter-Nevins claimed in court she was looking out for Nevins’ best interests when she moved her soon-to-be husband to a Franklin, Ohio, home she shared with a former lover and her teenage son. The move took place just days after their initial meeting.

Within three months of the meeting, Nevins moved away from the Dayton, Ohio, area for the first time in his life to a home in Burlington with Kenter-Nevins. He had no immediate family and his lifelong friends and acquaintances testified at trial they lost contact with Nevins for a year after the move.  During that year, Kenter-Nevins went to Boone District Court several times to gain legal control of Nevins’ finances and become his guardian, according to court records.

Despite judges placing restrictions on how Kenter-Nevins could spend the money, the trial was filled with testimony about her spending habits. She purchased seven cars and three homes within 13 days of gaining near unfettered access to Nevins’ money, according to court records. More cash was withdrawn at automated teller machines at casinos, those records state.  Friends from Ohio who couldn’t locate Nevins and a suspicious bank teller eventually called authorities in both states, and Kentucky Adult Protective Services began to investigate. Kenter-Nevins was summoned in September 2007 to district court to explain how she was spending Nevins’ money.

Less than 24 hours after that court appearance, Kenter-Nevins drove Nevins to Tennessee to get married. After the closest county clerk to the state line refused to issue a marriage license, the pair got a clerk in a neighboring county to issue the license.  They were married in a Tennessee state park while Nevins sat in the back seat of the car.  By December 2007, Nevins’ health had deteriorated to the point that he was placed in a nursing home. He died three months later, but not with Kenter-Nevins at his side.

She was spending the majority of her days at casinos gambling her husband’s mone away.
_________________________________
Wow, I really don't know how I feel about this case.  Don't we all exploit one another in our marriages and relationships?  What makes this different?  What makes this criminal?  That this woman was so transparent about it, or so single-minded in the pursuit of her own addictions?    While this certainly sounds like immorality, how does it become criminal behavior?  Isn't this just some version of the age old gold digger story?  Kentucky?  Isn't this the place where you can legally marry your sister?  Just kidding.

In immigration law, the "meretricious marriage" is a common scheme to obtain a green card (remember the movie with Gerard Depardieu?)  Those are marriages in name, alone, so that in one instance many years ago I was asked to defend a guy who married what turned out to be a woman old enought to be his his mother--in fact the "wife" turned out to be his girlfriend's mother--in attempt to obtain "residency" status.  When last I heard, my former client was back in Syria.
Posted by Anonymous at 7:49 AM