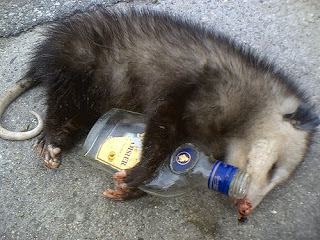 An Oliver Township, Pa. (north of Pittsburgh) man was spotted by witnesses trying to resuscitate a dead Opossum (anyone know the difference between a possum and an opossum, or are they the same thing?)  I suspect that this may be a heretofore unknown automatic indication that the lifegiver sammaritan is probably under the influence of something--probably alcohol.

This report comes via the Pittsburght Tribune.  According to "Trooper Jamie Levier said several witnesses saw Donald Wolfe, 55, of Brookville, near the animal Thursday afternoon along Route 36 in Oliver Township. She said one person saw Wolfe kneeling before the animal and gesturing as though he were conducting a seance, while another saw the mouth-to-mouth attempt. Levier said Wolfe was 'extremely intoxicated' and 'did have his mouth in the area of the animal's mouth, I guess.'"

As an ex-drinker, I can strongly relate to this story.  While I don't recall ever trying to resuscitate any dead thing, I do recall the sentimental impulse.  Then again I don't remember all the things I did do drunk (alliteration alert,) however, I do have vague recall of running around a city street in less than all my clothes one night, why I can't say I recollect the reason.
Posted by Anonymous at 8:36 PM