Your Bicycle Stereo Can Get You Cited 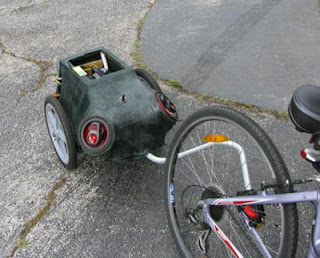 The Lorain (Ohio) Morning Journal is reporting on the excessive noise citation issued to Juan Rivas-Figueroa, age 20 who was riding his bike hauling a child's pull along trailer (unfortunately the article did not include a photo, but the illustration above might give you an idea of what was involved) becuase Mr. Rivas-Figueroa and equipped his bike with a full car stereo and speakers.

According to the account, "The officer told Rivas-Figueroa that he was playing his music too loud and that the police department had received several complaints in regards to a bicycle matching his. He was riding a black BMX bicycle and the trailer was purple." The stereo was powered by a specially-oused car battery. 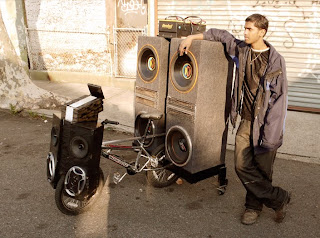 A slightly more elaborate version of this fine groovin' example of music on wheels.
Posted by Anonymous at 5:54 AM