According to the ABQJournal.com a colorful New Mexico judge self-reported his own sexual harassment following a "change in medication:" and will now serve a proposed 60-day suspension.  this is an excerpt form the ABQJournal report:

An "intense romantic fling" with an assistant public defender who had pending cases before state District Judge Bob Schwartz may cost the colorful judge — known for his wit and wisecracks — a 60-day unpaid suspension, according to court documents unsealed this week.   The New Mexico Judicial Standards Commission is recommending Schwartz be suspended without pay for 60 days, receive a formal public reprimand, complete a course on sexual harassment and leave the bench during future medication transitions.

According to the commission's findings, Schwartz, a former district attorney and governor's crime adviser, is accused of failing to uphold the integrity and independence of the judiciary; failing to avoid impropriety; failing to recuse himself from the pending cases involving the defender; and of not conducting 'extra-judicial activities as to minimize the risk of conflict with judicial obligations.'

The allegations stem from Schwartz's self-reporting to the commission last August that his judicial conduct fell below his own standards as a result of switching medications for a chronic illness in spring 2009. Schwartz, 60, called it a "very difficult time in my life". [ . . . ]

Among the alleged improprieties is a short-lived romantic relationship with a 29-year-old assistant public defender, who has since left that job.

According to the petition, the woman had represented defendants in Schwartz's court from November 2008 to late July 2009.

In early July 2009, Schwartz invited the defender to lunch on a workday. On what would be their first date, the judge gave the woman what he called a 'gag gift': a book titled 'The One Hour Orgasm,' with an official picture of himself in his judicial robe pasted over the picture of the book's author. He also gave her a pair of purple latex gloves. The next day, Schwartz took the woman to a concert in Santa Fe, according to the petition. After the concert, he told the woman he would recuse himself from her cases because he couldn't be fair. The couple went on to a bar called Anodyne in Downtown Albuquerque.

But Schwartz, who has never been accused of sexual harassment, failed to recuse himself from the cases in a timely manner, according to the petition.

He took action in two cases she was involved in on July 14, 2009, the petition states. In one of those cases, he publicly questioned his own prior decision to deny the woman's motion to dismiss. He withdrew his denial to dismiss and recused himself from that case, offering an ambiguous explanation.
_______________________________
The report which was sealed goes on to report that the Judge is apparently viewed by the Public Defender involved as not a "sexual harrasser," and especially talented and appropriate.  But here is a good Judge who made a mistake and dealt with it proactively.  But there is one important aspect of this story not discussed by the ABQJournal reporter, the criminal defendants implicated in the legal matters the Judge handled prior to his voluntray recusals.  Those are the rights, and the entitlement of the citizens implicated by Judge Schwartzs miscues.  It seems obvious that Judge Schwartz understood this. 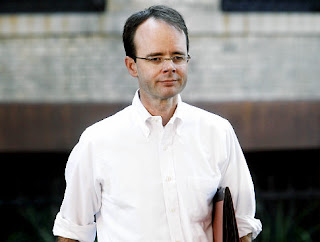 Compare and contrast this with the "disgraced" Manhatten judge, James Gibbons.

The news accounts surrounding the unfolding scandal involving Judge Gibbons include observations that this gentleman was "whip smart," a brilliant former prosector, and an excellent Judge.
Posted by Anonymous at 8:08 AM