It's All About the Money, Honey! 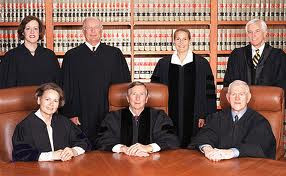 Reporter James Nash at the Columbus Dispatch brings us up to date on one or the most notorious junctures of money and judging, the political money spent on Ohio High Court Races (check Adam Liptak's New York Times blawg for the background on this Supreme Court and "campaign cash.")  Nash's Dispatch update follows:

"Candidates for the Ohio Supreme Court have spent nearly $30 million on their campaigns during the past decade, the second-highest total in the country, authors of a national study concluded.

Spending on Ohio Supreme Court races from 2000 to 2009 was second only to Alabama, according to three groups that studied campaign contributions to state supreme court candidates for a report released today.

The Brennan Center for Justice at New York University School of Law, the Justice at Stake Campaign and the National Institute on Money in State Politics are critical of the role of money in state court campaigns, saying it undermines public confidence in the impartiality of court rulings.  'For more than a decade, partisans and special interests of all stripes have been growing more organized in their efforts to use elections to tilt the scales of justice their way,'  their report stated. 'Many Americans have come to fear that justice is for sale.'

Ohio led the way in 2000, when a group affiliated with the U.S. and Ohio chambers of commerce spent $4.4million on television ads attacking then-Justice Alice Robie Resnick. The Democrat was re-elected anyway.

Since then, chamber-affiliated groups have continued to spend millions of dollars on Ohio Supreme Court races, with trial lawyers contributing a smaller share, the study found. All told, candidates for the court spent $21.2 million between 2000 and 2009, and outside groups - chiefly the chamber - spent $8.6million, according to the report. The torrid pace of spending on Ohio Supreme Court races slowed toward the end of the decade. The state ranked 10th in the country in expenditures during the 2008 election cycle, the three groups concluded.

Adam Skaggs, a lawyer at the Brennan Center and co-author of the report, said in an interview that other states have begun to catch up to Ohio. 'What happened in Ohio at the beginning of the decade is now the norm across the country,' he said.

Resnick's re-election in 2000 was the last time a Democrat won an election to the state's highest court. One Democrat, Chief Justice Eric Brown, currently holds a seat, but he was appointed by Gov. Ted Strickland. Brown is up for election in November. Trial lawyers have signaled a more active role this year in trying to get Brown and fellow Democrat Mary Jane Trapp, an appeals judge, elected to the court.

'In Ohio, the court is an absolute reflection of the corporate dollars that have gone into funding the campaigns,' said Dennis P. Mulvihill, president of the Ohio Association for Justice, a trade group of trial lawyers.

Ohio Chamber of Commerce President Andrew E. Doehrel said business groups jumped into court races in 2000 to counter the influence of activist judges, whose rulings he said create an unpredictable business climate.  'We've done a good job of educating voters and raising awareness of Supreme Court races,' Doehrel said."
________________
That "unpredictable business climate,"  that's what the Chamber calls being held accountable to pay for the individual and environmental damage corporations and businesses wreck on the citizens.  This is all about buying outcomes, and it works.  This is what Massey Energy and Don Blankenship did in West Virginia, and what Justice Gableman's election in Wisconsin was all about.
Posted by Anonymous at 10:33 AM