As I said in the past, sometimes stories come along  a local news websites, that need no additional comment from me.  And yet I still wish to convey--as jaded as I am after 30 years of wandering in and out of major and lesser courthouses around the country--that I too wonder at what motivates some folks to do what they do.  This story from the Pittsburgh Post-Gazette and reporter Timothy McNulty is one of those:


"Preparing for his day in court, Gary Guy Mathews took off his red dog collar and left his squeaky toy at home. It is now up to a judge whether he will wake up one day as Boomer the Dog and find his furry dreams come true.
The sight of  'furries' dressed in animal costumes has become commonplace in Pittsburgh, which for five summers has hosted Anthrocon, the largest annual convention of the anthropomorphic enthusiasts. But it is exceedingly rare -- even among a group committed to attributing human characteristics to animals -- to legally change one's name to that of a made-up dog.


When he was a teen, the now 44-year-old Green Tree man became obsessed with a short-lived NBC show called 'Here's Boomer,' about a stray mutt that saved people in trouble. In high school other kids began to call him Boomer and he broadcast a radio show about the dog from his basement. By adulthood he was dressing as the shaggy-haired dog at conventions and parties, for the last few years in a full-sized Boomer suit made of shredded paper. 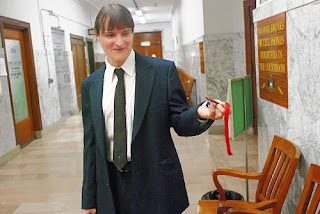 Early this year he began the process of legally changing his name to Boomer The Dog, noting many of his friends already called him that: one of his exhibits in a hearing Tuesday before Allegheny County Common Pleas Court Judge Robert W. Folino was a letter addressed to his adopted name from a friend named Hobnose Bordercollie. His own father, Guy Mathews, had legally changed his name from Orlando Matteucci, he told the judge. (He eventually got his late parents to call him Boomer, too, but it wasn't easy. Life as a furry 'is good and it's bad. It's hard to get people in your life to adjust,' he said in an interview.)
After years of thinking about the name change, Mr. Mathews, who is single, began the legal process early this year, which included getting his fingerprints checked through a state police criminal records database. 'It took some time to work up the nerve. I treated it like a science project,'  he said. He filed for the name change in June.

Judge Folino questioned Mr. Mathews on if he might just change his first name to Boomer and if he has been paid to perform as the dog. (The unemployed computer technician said he had not been paid, "but it would be nice if I would be.")

The judge said he would issue a ruling in a couple days, saying he might rule against the name if it 'causes confusion in the community'  or raises the "likelihood of unintended consequences,' such as being 'seen as bizarre.'  Dr. Samuel Conway, the CEO of Anthrocon, said he knew of only two others in furry fandom who had legally changed their names out of the several thousand involved in the movement.

'I do not believe it is any more common among our number than one would find in the rest of society, where people are often driven to change their names out of religious fervor, a sense of cultural identity, or other reason of personal interest,' he said in an e-mail.

'I wish Mr. the Dog luck in his pursuit, with the earnest hope that he has chosen a career path for which such a monicker would be of benefit.'"
Posted by Anonymous at 2:29 PM