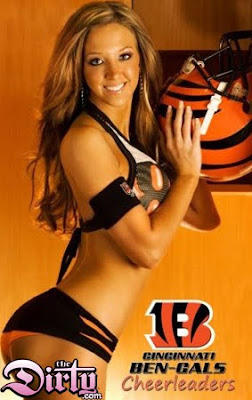 According to an AP report at AZCentral a Scottsdale, Arizona website called theDirty.com has been hit with an $11 million dollar judgement for libel and slander by running a Cheerleader's picture and suggesting that she had two venereal diseases.  Here's an excerpt from the story:

"A Scottsdale-based gossip website has been hit with an $11 million judgment for libel and slander after posting false accusations about a northern Kentucky teacher who sidelines as a Cincinnati Bengals cheerleader.

The [default] judgment against Dirty World Entertainment Recordings, which runs the site Thedirty.com, came Thursday [in] a lawsuit brought by Sarah Jones, a high school teacher [and cheerleader] whose pictur[e] was posted . . . with an accusation she had been exposed to two venereal diseases.

U.S. District Judge William O. Bertelsman added an annual interest rate of 0.25 percent to the $1 million in compensatory damages and $10 million in punitive damages.  An e-mail message sent to the operator of the website, Hooman Karamian, who uses the online name 'Nik Ritchie,' was not [returned.]"
_______________________
By the way, the image (above) was taken directly from the website which is still up and running and which is still running the libelous story posted attributing the STD claims to an ex-boyfriend.  Nice.
Posted by Anonymous at 2:01 PM