When You File a Lawsuit, Be Prepared To Answer Discovery 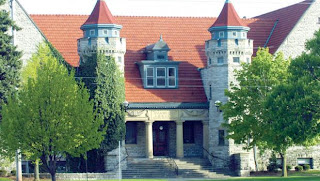 Reporter Tom Jackson at the Sandusky Register (a legendary newspaper, more on that in a bit) reports on the dismissal of a federal lawsuit filed by a library patron who refused to answer discovery.  The story in excerpt:

"A federal judge in Toledo has thrown out a lawsuit filed by a library patronangry over being ejected from the Sandusky Library.

James E. Pietrangelo II sued the library, the City of Sandusky and two police officers last year in federal court in Toledo, alleging a civil rights violation, after an Oct. 28 incident in which he complained other that patrons using the computers were too noisy.  In an ensuing confrontation, he refused a request by the library staff to leave and was escorted out by the two officers.

U.S. District Judge James Carr threw out Pietrangelo's lawsuit in June, dismissing it with prejudice, meaning that it can't be refiled.  He also found Pietrangelo in contempt of court for refusing to answer questions posed to him by the library's lawyer, Cleveland attorney Margaret Koesel, even after Carr ordered Pietrangelo to answer the questions. Carr told Koesel to submit a bill to the court so that Pietrangelo can be made to pay court costs and fees.

According to Koesel, Pietrangelo refused to answer questions such as 'Are you currently employed?'  and 'Where did you go to college?'

He also did not answer questions about his mental state, despite claiming that being asked to leave the library caused him emotional distress.  The legal case isn't over yet, because Pietrangelo appealed the judge's ruling to the U.S. Sixth Circuit Court of Appeals in Cincinnati. Pietrangelo could not be reached for comment.

Pietrangelo, a former Army captain, garnered national publicity when he handcuffed himself to a fence in front of the White House in March this year. He was arrested, but charges were later dropped. Pietrangelo had been protesting the military's 'Don't Ask, Don't Tell' policy."
________________________
The Sandusky Register formerly known as the Daily Register was a "Republican" newspaper and the first newspaper east of the Mississippi to endorse Abraham Lincoln.  After Lincoln was elected President, Lincoln's train ride to the District of Columbia for his inauguration was via a route that carried him through Sandusky and Cleveland in recognition of this historical fact.
Posted by Anonymous at 6:21 AM