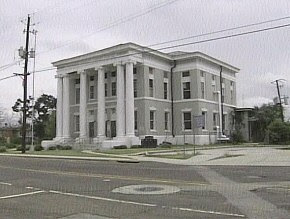 Over the last year, Bad Lawyer has talked at some length about bad courtrooms, courtroom design and courthouses architecture.  Who knew that the august ABAJournal.com would weigh-in with a tip to this like-minded account of the bad courtroom acoustics triggering a mistrial.  This story is at WLOX in Bay St. Louis, Mississippi:

A Hancock County attorney is taking legal action to force the county to fix the acoustics at the renovated courthouse. Jimmy McGuire filed a motion after a judge declared a mistrial last week in a case because jurors simply could not hear the attorneys or witnesses.  'This is the only courthouse in the State of Mississippi where you can't hear yourself talk, hear the witnesses speak or hear the judge's commands,'  McGuire said.

The 102-year-old courthouse reopened last summer after extensive Katrina repairs were completed. The sound problem became apparent when the gavel fell for the first case. WLOX News first reported on the courthouse echo a year ago. Now, Lady Justice could finally force supervisors to find a fix.

'I wrote them a letter asking them to take action because I have a criminal case a murder case coming up in October, and I want the jurors to be able to hear everything that's being said in order to be able to represent my client to the fullest.'

County supervisors are aware of the problem. 'This room right now resonates or reverbs approximately three and a half seconds too long,' an acoustical expert told WLOX News last year. 'That has to be brought down to a comfortable one and a half seconds. Anything over that is just impractical and unacceptable.'

'The straw that broke the camel's back was Thursday of last week, whenever Judge Lisa Dobson had to declare a mistrial in a civil case because the jurors raised their hands and said they couldn't hear what was being said,' McGuire said.

Caston said the mistrial left the plaintiff in the case in tears because she had waited years for her case to come to trial.  The mistrial also cost the county time and money. The case will now have to be rescheduled and a new jury selected.

Hancock County Board Attorney Ronnie Artiques said the county has been trying, but protecting the historic integrity of the building has made finding a solution difficult.  'Everything from throw rugs, to curtains, to sound panels, to fabric; We've had a merit of options thrown at us, but really nothing concrete that we know [the Mississippi Department of] Archives and History will approve,' Artigues said.
_______________________________
I previously related my experience in the courtroom with the obnoxious vertical paneling that had the effect of hypnotizing jurors, especially after lunch.  Courtrooms that feature truly bizarre, horrid designs--the triumph of architecture by governmental numbskulls.
Posted by Anonymous at 11:46 AM